Work on the War Salon began in 1678 and was finished off with Le Brun's decoration in 1786. The overall décor depicts the victories of France and leads up to the long-longed for  peace at Nijmegen. Le Brun chose marble to adorn the walls and six trophies - not to mention the bronzed carvings - are the main features of the decoration. The salon is placed as the very last room of the King's Grand Apartments. Originally the room was laid out to be the Salon of Jupiter but the plans were changed - today the War Salon is symmetrical to the Peace Salon on the other side of the Hall of Mirrors.
Louis XIV is strongly represented by a large relief of the Sun King himself on horseback obviously defeating his enemies - this was another way to underline the glorious monarch. Above hangs a bas-relief with none other than Clio predicting the King's future; one can only imagine that the prediction was good. Le Brun also worked on the ceiling where he painted an armed France in the midst floating on clouds and surrounded by victories. Another portrait of Louis XIV is part of this painting - the shield clearly depicts the King. Four panels accompany the huge painting at the ceiling, each symbolic and paying tribute to French victory: the first three are those enemies that France has already conquered: Germany (symbolized by a kneeling eagle), Spain (a roaring lion) and Holland (upside down on a lion). The last panel depicts the goddess of war in a rage between the symbols of rebellion and discord. 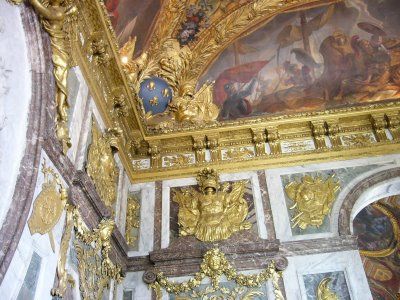 Posted by Louise Boisen Schmidt at 09:35