Louis XIV was a firm believer in the system he created which allowed him - or his family - little privacy. Consequently, the rooms allotted for his owe personal use were few (compared to the château's size) and were not particularly private at that. 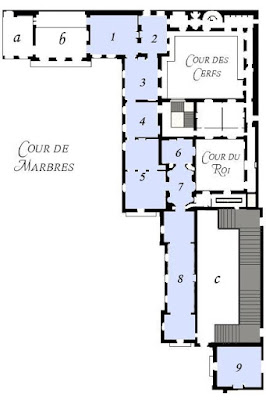 Louis XV was far more reserved than his great-grandfather had been and found it difficult to cope with the constant public lifestyle created for him. So, he made several alterations to the King's private apartment while he left the majority of the remaining château untouched. He altered the private apartment twice: Louis XVI was not as active with rebuilding and adding rooms to his private apartment. Instead, he made just a few changes which for the most part involved changing the purpose of a room. This particular floor plan is not exactly as the private apartment looks today since this is from before the alterations made by Louis-Philippe following the French Revolution.

8) Salon of the Hunt

After the Revolution, several years passed with Versailles standing as an empty shell while France was in turmoil. In the 1830's the monarchy was reinstated and the new King, Louis-Philippe, managed to carry out certain drastic changes during his rather short rule. This is how the King's private apartment looks today.

6) Salon of the Clock

8) Antechamber of the Dogs

a) Council Chamber
b) Louis-Philippe Staircase
GemGemGemGem
Posted by Louise Boisen Schmidt at 13:12 No comments:

Infanta Marie Thérèse was born on 10 September 1638 to King Philip IV and Elisabeth of France. She became the heir apparent to the throne - since females can inherit the Spanish throne - during the periods when she had no living brothers.

At the age of 20 Spain and France were approaching peace and it was decided that the marriage of Marie Thérèse and Louis XIV would cement the peace alliance. The actual marriage took place on 9 June 1660 but luckily the royal couple was spared the embarrassment of a public consummation.
Once established at the French court the first year of Marie Thérèse's marriage was blissful. Her husband was faithful and eager to please his new wife while her mother-in-law (also her aunt) quickly became a close friend.

Marie Thérèse's bliss in France continued when she became pregnant not long after her marriage.She gave birth to the expected son in 1661 and had as such already fulfilled her main role. For those who had expected her to be a gateway to power they were sorely disappointed. Small of stature, Marie Thérèse had no interest in either politics or court intrigues. Her main interests were religion and gambling. It did not take long for the King to tire of her and he set off to fulfil his "duty" as King and took a mistress,
The Queen was not disheartened since she had been brought up as other young princesses to expect this sort of behaviour - rather it was anticipated than anything else. Only on few occasions did she express her displeasure against the favourites but never towards the King himself. For her part the Queen had little to complain about as to her position. Louis XIV took a long succession of mistresses but he insisted that Marie Thérèse and her position be respected. Likewise, he made sure that she got her share of his attentions and continued to pay her regular visits - both daily and nightly.

Amongst the courtiers the Queen was rather the butt of jokes than a respected figure. She spoke French very poorly and her lack of beauty and wit meant that she was considered completely uninteresting. This was only heightened by the fact that she had neither access to nor interest in power. As a direct consequence Marie Thérèse became increasingly isolated after Anne of Austria's death. She now spent the majority of her time in her own apartments in company with Spanish attendants and her favourite Spanish dwarfs.


The only time she had any influence at all was when her husband appointed her nominal regent in his absence. Despite having overall left her to do as she pleased the King and Queen had an oddly peaceful marriage. Marie Thérèse was deeply in love with her husband and completely respected him. She never made any public display of anger against him; not even when he waged war against her home country or flaunted his mistresses at court. For this the King was deeply grateful and made sure that she had everything she could desire.
Marie Thérèse would give birth six times but only her first child lived beyond infancy. In July 1683 she fell seriously ill which prompted the King to sent for the sacraments for his wife. However, there was nothing they could do and the Marie Thérèse died a painful death on 30th July 1683. Louis XIV had refused to leave her side and when he was told of her death famously said: "This is the only trouble she has ever given me".
Posted by Louise Boisen Schmidt at 14:48 No comments: 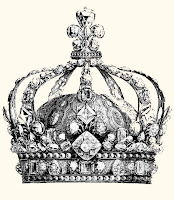 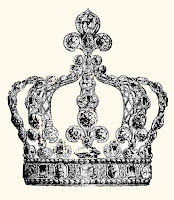 BROTHERS AND SISTERS OF THE KING

LEGITIMATE DAUGHTERS OF THE KING
(* not including children that died very young/were stillborn)
Posted by Louise Boisen Schmidt at 19:55 No comments: