The Abducting of Mademoiselle de Roquelaure

The betrothal between Louis, Prince de Léon, eldest son of the Duc de Rohan and Mademoiselle de Roquelaure was considered a suitable - both bride and groom being the offspring of peers of the realm - but there was another advantage for the Duc de Rohan. Mademoiselle de Roquelaure was said to be the daughter of Louis XIV, although the king never recognised her as such. The marriage contract was all but signed when the mother of the bride-to-be suddenly changed her conditions and demanded that the Duc de Rohan gave his son a larger allowance.

Neither the Prince de Léon nor Mademoiselle de Roquelaure were allegedly pleased with this decision but to no avail. Interestingly, neither was the king. The Marquis de Dangeau relates that the king was eager to see the marriage concluded and even went so far as to pressure the Duc de Rohan to increase his son's allowance.

Consequently, Mademoiselle de Roquelaure was shipped back to the convent where she had received her education. However, she was not to remain there for long. The Prince de Léon had not given up on marrying her and decided to abduct her. Abduction usually infers a sinister motive on behalf of the abductor but in this case it was quite the opposite: the Prince de Léon intended to honour the promises originally made between the two families. It was claimed that the would-be bridegroom had a carriage outfitted with his coat-of-arms and sent to the convent. There, a message was to be given to the Mademoiselle de Roquelaure that her mother was waiting for her. Instead, the carriage would take them to a house owned by the Duc de Lorges. He and Mademoiselle de Roquelaure were married on 6 March 1708.

Infuriated, the Duchesse de Roquelaure - mother of the mademoiselle - went straight to the king to complain. However, the plan did not go quite as she had wished. Rather than being outraged, the courtiers (chief amongst them the Duchesse de Bourgogne) found the whole situation hilarious. The absurdity lay not in the disrupted marriage agreement but in far more personal attributes. Both the Prince de Léon and Mademoiselle de Roquelaure were known to be rather ugly. The latter was said to be hunchbacked and "very ugly" and her husband no better off. The court were accustomed to tales of such heroic romanticism but (then and now) heroes and heroines are always beautiful. Besides, the bride was 25 years old and was not considered likely to make another such advantageous match.

The Duc de Saint-Simon informs us that once the marriage rites had been performed, the couple was left alone for a few hours and the new Princesse de Léon was taken back to the convent where she informed her mother - via letter - of her recent nuptials.

The Duc de Roquelaure was just as furious as his lady wife. He demanded that the Prince de Léon be prosecuted as a criminal. Few took him seriously and those who reasoned that it could not possibly hold up since the bride had not been forced into the marriage.

The king ordered that the marriage be honoured since it had already taken place. In response both the families involved decided to reduce the money given to the newlyweds. The result was that the couple had severe financial difficulties during their first years of marriage. At the end of the day, the efforts of the Prince de Léon turned out to have been all but useless. Hénault relates that the couple were never on good terms.
Posted by Louise Boisen Schmidt at 23:16 No comments:

Email ThisBlogThis!Share to TwitterShare to FacebookShare to Pinterest
Labels: royal-gossip

The Alcoholism of the Regent

Following the increasingly sombre mood at the court of Louis XIV, the Regency was characterized by excess. Philippe II d'Orléans took the role of Regent and he himself embodied the decadence of his time. The Regent and his entourage - referred to as the roués - were infamous for their excessive drinking.

According to the Cardinal Dubois, Philippe's alcoholism was apparent to everyone. The Cardinal claimed that the Regent drank a minimum of five bottles a day. Naturally, such a massive consumption of alcohol would leave its mark. It was not uncommon for Philippe to attend mass while heavily intoxicated. On some occasions, his drinking would land him in rather undignified situations. Apparently, following one night of heavy drinking he was returning from Saint-Cloud when he exited his carriage - and fell directly into a muddy ditch. Unable to free himself of this predicament, he sent for his mistress to aid him.

Champagne appears to have been the drink of choice of the Regent. The drink became increasingly popular in his inner circle which was quickly copied both in Paris and abroad.

Besides the more embarrassing episodes, the Regent occasionally found himself in, there was another aspect of Philippe's nightlife that brought concern to his court. Sometimes he would suddenly tire of the festivities at the Palais-Royal and would strike out with a few companions to roam about in the streets of Paris. Without bodyguards it was feared that he might get himself in serious danger.

Only rarely did the binge-drinking affect the day-to-day management of the kingdom. Despite spending the majority of the night out and about, he always performed his duties as regent. However, once the Regent put away his work, he did little to nothing to check his impulses. During another drunken dinner with the Cardinal Dubois, the Regent's mistress and the Scottish John Law, someone approached the Regent with a document to sign. However, the Regent was way too intoxicated to actually put pen to paper which he himself remarked upon.

As the saying goes, the apple does not fall far from the tree. Philippe's daughter, the infamous Marie-Louise-Élisabeth, Duchesse de Berri, was equally addicted to drink.
Posted by Louise Boisen Schmidt at 22:56 No comments:

Email ThisBlogThis!Share to TwitterShare to FacebookShare to Pinterest
Labels: health

The Robe Battante is an early version of the robe à la Française but a considerably more comfortable one than the tightly laced ones later favoured by Versailles. It was cut in the same fashion; hanging from the shoulders in pleats. However, a robe battante was unfitted both at the front and at the back - therefore, it was far more informal than a fitted one. In the early part of the 18th century the robe battante was popular as a maternity gown particularly because the stomach could easier be concealed - although the stomacher could still be visible. This was a matter of taste. It was not necessarily cut completely open but could be fastened with buttons or even sewn up for a more modest look.

When the style was still new, it was considered to give the wearer a look of innocence. For that reason it was sometimes nicknamed the "innocente".

Nevertheless, a corset was usually worn beneath it to keep an upright posture. In the case of pregnancy it could be dropped but it was often a matter of formality. Once Louis XV reached his majority, it was always worn with a corset. From around 1718, another piece of clothing was added to the ensemble: the pannier. The result was that the silhouette became even more bell-like. 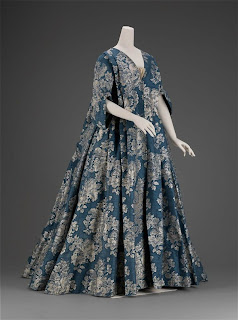 Some claimed that Madame de Maintenon had created the gown partially because it suited her extraordinarily well and partially due to her frequent pregnancies by the king. It was said that she intended to hide her condition but it soon became almost an official symbol of her being pregnant. As Madame Palatine said: "Madame de Maintenon has put on her robe battante, so she must be pregnant".

Madame de Maintenon's legacy would be carried on by her grand-daughter, the Duchesse de Berri, whose scandalous lifestyle resulted in many pregnancies outside marriage. Even after, the Duchesse's premature death, the robe battante continued to be fashionable during the 1720's - 1740's.

Those who could afford it - like Montespan or the Duchesse de Berri - had their robe battantes made from silk or muslin. Because the stomacher was still on display, it was often made all the more elaborate. It can easily be imagined that some sought to outweigh the simplicity of the gown with a lavish stomacher. 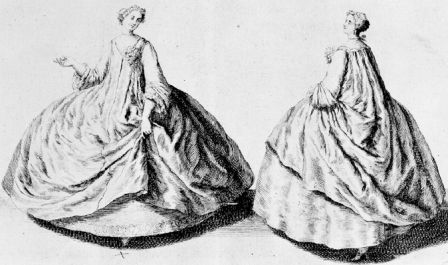 Note that the robe battante is very similar to a robe volante.
Posted by Louise Boisen Schmidt at 23:21 No comments:

Anne de Richelieu was born in 1622 and spent the majority of her life at court of either Louis XIII or Louis XIV. She was the daughter of François Poussard du Vigean, Baron de Fors and Anne de Neufbourg.

She was first married to François-Alexandre d'Albret, Comte de Marennes on 16 October 1644. However, her husband died after a few years of marriage which left Anne once again on the marriage market. Her father was quick to arrange for a new match for her - and a very advantageous one at that. In 1649, Anne was married to the Duc de Richelieu.

The marriage was considered to be somewhat of a mystery. Anne was particularly young nor did she have a fortune. Her father's title was not very grand and Anne herself was not considered to be beautiful. As Madame de Caylus put it, the match was to "the astonishment of the whole court".

Anne's years as a Duchesse earned her a position of privilege. On 21 November 1671, she was given her own official position at court when she was made Premier dame d'honneur to Marie-Thérèse. Prior to this, she had lived primarily at the Hôtel de Richlieu in Paris which is now destroyed. It was while she served the queen, that she made a new friend: Madame de Montespan. Despite being employed by the spouse of Madame de Montespan's lover, the two got on quite well. As it happens, Anne used her position near the queen to ease the relationship between La Montespan and Marie Thérèse.

Meanwhile, in her own marriage, Anne encountered somewhat different troubles. Her husband, Armand Jean de Vignerot du Plessis, had his own established mistress in Françoise de Dreux. Such arrangements were far from uncommon but this particular one almost turned fatal. Françoise de Dreux dabbled in some sinister occult practices and apparently came to consider Anne to be in her way. Françoise attempted to poison Anne but failed. Françoise would later be convicted of the attempted murder as well as several successful ones in 1679.

Anne would never have children of her own. Neither of her marriages produced any known offspring and she does not appear to have had any affairs.

Marie Thérèse died in 1683 which meant that Anne was without official employ. However, likely due to her favour with the king, she was transferred to the service of the Grande Dauphine. Here she made a new friend who would come to serve the same capacity as Madame de Montespan had: Madame de Maintenon. Apparently, Anne had a habit of making fast friends with the king's mistresses but without sacrificing her own position. Unfortunately for Anne, she would not live to reap the rewards of being the friend of Madame de Maintenon. Anne died on 28 May 1684 in Paris.
Posted by Louise Boisen Schmidt at 20:35 No comments: