It was common at executions of notable personages to attempt to get a momentum of the macabre event. Naturally, this was also the case with Louis XVI's case. A surviving report tells of how some spectators pushed to the front and dipped their handkerchiefs in the blood of the fallen monarch. Allegedly, one such handkerchief survived which belonged to Maximilien Bourdaloue. He kept the scrap of fabric in a gourd with the inscription "blood of Louis XVI, after his beheading".

The handkerchief itself has not survived but traces of blood within the blood made it possible to run DNA tests. Early on, it was found that the blood could very well have been Louis'. One of the main arguments in favour of the authenticity of the blood is the presence of a rare Y-chromosome. Henri IV's head provided a DNA reference which showed that Henri had had the rare Y-chromosome. Louis XVI was Henri's descendant (7 generations) and the sample showed traces of the same rarity. However, tests carried out in 2013 showed that the mummified head might not have been that of Henri IV at all - rendering it irrelevant in connection with identifying the blood in the gourd.

The scientific team involved determined that the sample was most likely to have originating from a person with brown eyes. Louis XVI - on the other hand - had blue eyes. As it happens, Professor Lalueza-Fox considers the possibility of the owner of the blood to have had blue eyes to be between 2.4 - 3 %.

Furthermore, the test was able to conclude that the 76 % of the deceased's ancestry came from northern Italy. Louis' primary ancestry was French, Polish and German. Louis XVI was said to have been remarkably tall for his age at 185 cm. Yet, the person whose blood was tested was just a little taller than the average male which would have made him little more than 167 cm.

So, while the blood is unlikely to have been that of the dethroned king, it is still likely that it did come from a person beheaded by guillotine during the French Revolution. Thousands of people were beheaded and the scaffold was not wiped down afterwards. It is possible that the blood belonged to someone beheaded before the king. However, it is also possible that the blood had nothing to do with the guillotine. It has been suggested that Maximilien Bourdaloue might have deliberately lied.
Posted by Louise Boisen Schmidt at 22:04 No comments:

Email ThisBlogThis!Share to TwitterShare to FacebookShare to Pinterest
Labels: contemporary


The life of Philippe d'Orléans is interesting in itself which is why I chose this book. Unfortunately, once I had read it, I did not necessarily think that I knew a lot more about him. The book does a good job of telling the context of Louis XIV's court and the time but the life of Philippe is covered somewhat superficially. To be sure, it mentions the more important events of his life but it never seems to go beyond the surface. 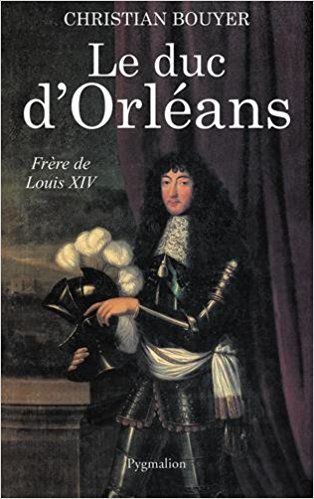 Posted by Louise Boisen Schmidt at 21:27 No comments:

Email ThisBlogThis!Share to TwitterShare to FacebookShare to Pinterest
Labels: review

The Final Resting Places of the Bourbons

Tradition had it that the kings and queens of France were buried in the cathedral of Saint-Denis in Paris. However, the tumultuous years of the French Revolution led not only to the end of the tradition but also resulted in the remains of the French monarchs being desecrated. Some were later returned to their final resting place but other were not. These are the fates of the mortal remains of the people who ruled France in the age of Versailles.

On the last day of July, 1793, it was decided to break into the tombs of the old kings and queens of France. The new republic was in dire need of cash and as it was assumed that royalty was buried with jewels, they were meant to pay for the party. There was a symbolic reason for the vandalism too. The tombs and their splendour represented an age of hierarchy which the revolution aimed to eradicate.

The coffins were opened on 15 October. Louis XIV, Anne of Austria as well as Marie Thérèse's graves were opened and the corpses stripped of any valuables. The following day - the day of Marie Antoinette's execution - saw the process repeated on the graves of Louis XV and Philippe d'Orléans (Louis XIV's brother).
The bodies themselves were not treated kindly either. A massive pit had been dug in the earth immediately outside the cathedral and the remains were tossed in there with abandon.

Before the revolution, the cathedral of Saint-Denis had been filled with bronze and copper statues of the former monarchs. These - alongside with the lead coffins - were melted down and transformed into bullets, cannons etc. A great deal of the extravagant tombs were likewise destroyed but for no particular practical reason.

Not everything in the tombs of Saint-Denis was destroyed. Some pieces of the dead were taken as "trophies" or souvenirs. Louis XIV's heart was stolen - legend has it that it was eaten by the extremely eccentric William Buckland, although it seems unlikely.

However, not all royals were buried at Saint-Denis. The recently executed Louis XVI's corpse had been sent to the cemetery of the Church of the Madeleine were it was buried without pomp. There was not much respect afforded to the former king either. He was not given a burial stone and his head was placed between his feet before the body was covered with a layer of lime. Marie Antoinette's remains suffered the same fate; she was taken to the same graveyard and buried without a marker.

Some of the Bourbons' bodies were not buried at Saint-Denis - instead, their hearts were. This is the case for Louis Ferdinand (son of Louis XV) whose body was laid to rest in the cathedral of Saint-Etienne in Sens. Marie Josèphe's body is also buried in that cathedral.
One particular member of the French royal family was never buried in a cathedral. Madame Élisabeth was buried in a mass grave at the Errancis Cemetery. When the Comte de Provence became king, he attempted to retrieve her body but none of those in the mass grave could be identified. Instead, their remains were taken to the infamous catacombs. Somewhere down there, is the remains of the sister of Louis XVI - perhaps as part of the elaborate decorations made up of skulls and bones.

The poor Louis XVIII's remains were never identified either. After his death at age 10, his body was quietly buried at the Sainte-Marguerite graveyard. However, his heart - following custom - was removed. The heart would be buried next to his parents in 2004. Yet, his body has not been recovered. Only a skull of a teenager was found in the area where he was buried which could not be his.

By 1815, the Bourbons once again sat on the throne. It was therefore decreed that the remains should be excavated from the mass grave and restored to the sanctity of the cathedral. However, the remains had been handled so roughly and had deteriorated so much, that they could not be identified. It must be remembered that even the well-conserved body of Louis XIV was without the protective environment it had enjoyed in the tomb. The remains were instead placed in an ossuary.

That same year, the bodies of Marie Antoinette and Louis XVI were added to the ossuary and given a proper burial.
Posted by Louise Boisen Schmidt at 22:28 No comments: