Sothesby auctioned off a wonderful collection of twenty-three design sketches for jewellery clearly made for the upper class. The sketches date back to the third quarter of the 18th century which would place it in the reign of Louis XV. According to the curators of Sothesby it is likely that these were intended to be distributed among goldsmiths in Paris. Also they are most likely drawn in the size they would be produced in.
The drawings are thought to be the work of Vander Cruycen. Some of his other designs are housed in Vienna which meant that the curators could compare them. Email ThisBlogThis!Share to TwitterShare to FacebookShare to Pinterest
Labels: lost-jewels

Portrait of the Week: Week 44

Posted by Louise Boisen Schmidt at 13:13 No comments:

Email ThisBlogThis!Share to TwitterShare to FacebookShare to Pinterest
Labels: weekly-portrait

Posted by Louise Boisen Schmidt at 20:17 No comments: 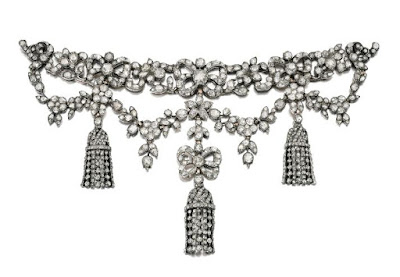 
Posted by Louise Boisen Schmidt at 12:38 No comments: