Serving as a parade chamber a huge bed was placed at the centre of the room but was removed during the winter in order to make room for gaming tables. The King's bed was embroidered with his arms  Originally this room was filled with furniture of solid silver: a balustrade, tables, mirrors, chandeliers and a mantelpiece - however these were melted down in 1689 so Louis XIV could pay for the costly wars. Also the magnificent tapestries of brocade woven in gold and silver thread were sacrificed to pay for the Spanish War of Succession. After the death of the Sun King his body lay in state in this very room for 8 days.

When the Duke d'Anjou was proclaimed to be the next King of Spain he stayed in this room with his new rank - he would occupy the salon for a couple of weeks.

Once again the god that inspired the name of the salon also inspired the decoration. The ceiling is adorned with a large painting of Mercury in his chariot painted by Jean-Baptiste de Champaigne. Besides this main painting there are four other paintings in the ceiling moulds; these include several figures from the Antiquity such as Aristotle, Alexander and Augustus. A large clock is on display in the room. It was offered to Louis XIV by its maker Antoine Morand in 1706. One can see through the clock mechanism and the clock is adorned with a miniature figure of Louis XIV crowned by victory. The bed that is now at display in the Mercury salon is the one that Louis-Philippe placed there when he transformed Versailles from a royal residence to a museum.
The remaining furniture in the room has been recreated after the Versailles inventory list since the original furniture was lost during the Revolution. Louis XIV used this room as a part of his bathing rooms - it was known as the octagonal room. At that time it was renowned for the extreme wealth in marble, paintings and sculptures that had gone into this room but that changed when the room was handed over to the Mesdames Tantes in 1763. They thought that the marble décor was too old-fashioned and immediately had the room redone after the new fashions. The only remaining parts of the original room are the cornice, the beautiful fireplace and the decorations in the corners - everything else had undergone a monumental change.

There is one object in particular that remains as a testimony to Madame Victoire's passion for music: the harpsichord by Blanchet. Madame Victoire was regarded as one of the finest players of this instrument - a thought shared by people outside the French court. Mozart himself dedicated his first six pieces on the harpsichord to the Madame. 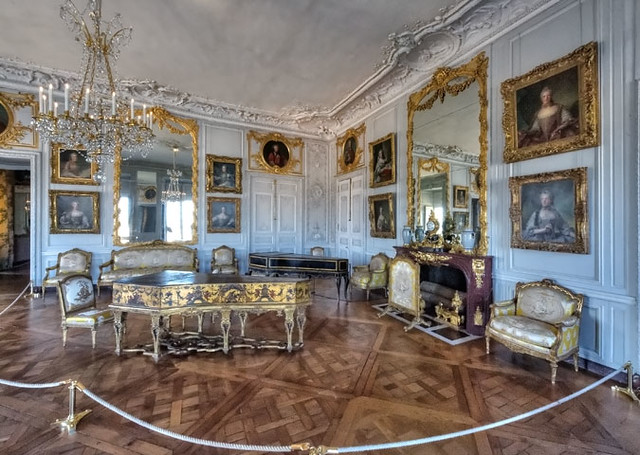 Posted by Louise Boisen Schmidt at 10:24 No comments:

Library of the Dauphin

This room served as a library to Louis XV's son and later on to Louis XVI when he was Dauphin. Louis XVI's mother also inhabited this particular room prior to her death. The very taste of Louis XV is clear throughout the decorations of his son's library; many of these consists of angels playing instruments - music was always a great comfort to Louis XV. The panelling - of wood - dates back to 1755. Joseph Vernet painted the sea landscapes on the four over-doors.
The furnitures of the library counts a chest of drawers - containing a golden clock - by Criaerd and a writing table dating from the year of 1756 and commissioned for Louis XVI.

In order to create a perfect symmetry in the room, the many "books" are in fact merely pieces of books. The glass "cabinets" for books are lined with blue silk. Posted by Louise Boisen Schmidt at 10:07 No comments:

Second Antechamber of the Dauphine

Like many other rooms at Versailles the Dauphine's Second Antechamber was originally not the size it is now. Formerly this room was divided into four minor cabinets for the Grande Mademoiselle and in 1683 it was transformed into the vestibule leading up to the apartments of Monseigneur, who was the eldest son of the Duc de Bourgogne. But the room was not settled yet. It changed to the ownership of the Duc de Berry who used it as an antechamber and from that on to the Maréchal de Villars in 1724 to whom it served as a part of the main apartment. It was not until 1747 that the room changed to the Second Antechamber of the Dauphine Marie-Josèphe of Saxony.

Following Versailles-tradition the room is richly decorated with paintings and other pieces of art. A large portrait of Marie Leszczinska - wearing her "royal costume" - is one of the paintings chosen for this room alongside with a portrait of a princess (exactly who it is is unknown). Above the door-frames two paintings of flowers by Jean-Baptiste Monnoyer is hanging. The large fireplace is thought to have once been placed in the bedroom of Marie Leszczinska and is made of solid marble. On the chimney-piece stands a pretty bust of the Regent. Lastly a large portrait of Louis XV is adorning the northern wall.

Posted by Louise Boisen Schmidt at 09:53 No comments:

When the King and Queen held their evening soirées they would use this room for refreshments. Liqueurs, wine and coffee would be arranged on elegant tables - ready for the privileged guests. Also, it worked as the antechamber of the Cabinet of Curiosities (of which nothing remains) which is now the Gaming Room of Louis XVI.
Whenever the King had private guests, he used this room to exhibit his silverware vases, precious gemstones and medals - a sight that would always bring out the admiration in the viewers. Above the vault the royal vessel has been depicted and the King's vessel itself (a precious "statue" of a ship without a mast) was often exhibited during the soirées or placed on the King's table during the official suppers. In fact, this object was the very symbol of power and everyone had to salute it when they went by! 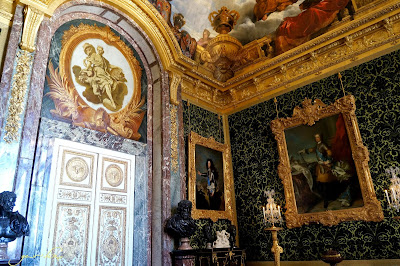 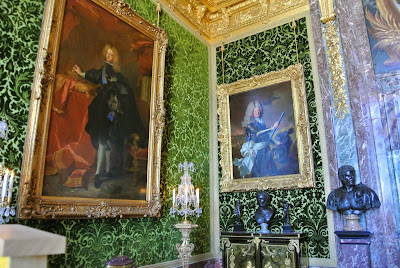 Posted by Louise Boisen Schmidt at 22:17 No comments:

The bathroom was one of the very last changes added to the castle by Louis XV before his death. The engraving of the wood-work are specially made to fit with a bathroom - symbols of diverse "aquatic pleasures" cut out in medallions in gold, bronze and green gold of a mat varnish. Unlike many of the other wood-works carried out during Louis XV these were not made by Verbeckt but by his very rival Antoine Rosseau in 1771. The floor reveals where the baths were placed by a slight change in the marble floor. The fireplace was made of green marble.
Louis XVI was not interested in using the room as a bathroom - instead he had it changed into a privy purse room where he would store his personal accounts. 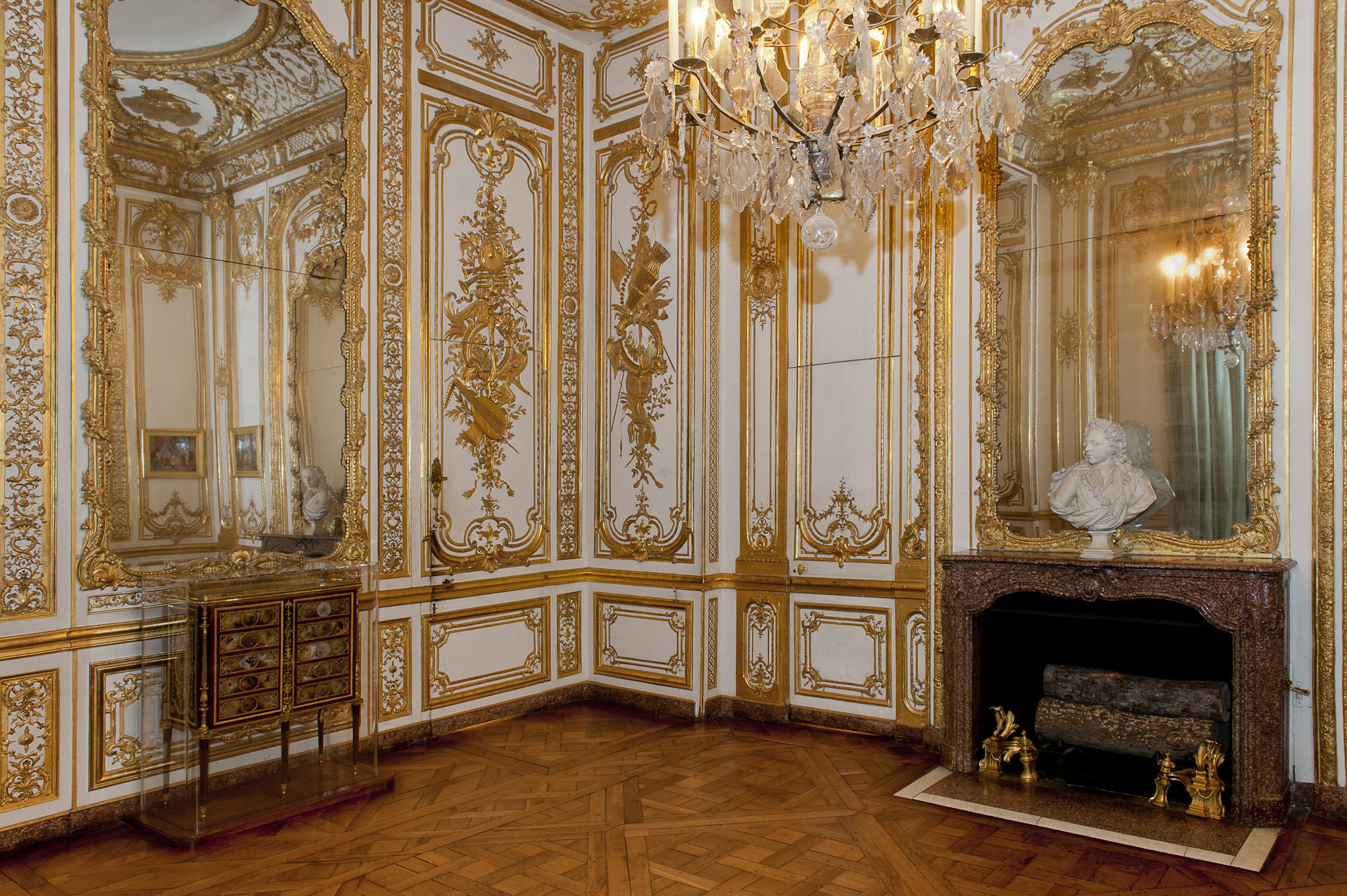 Posted by Louise Boisen Schmidt at 22:03 No comments:

Created in 1769 during the reign of Louis XV this room served as a dining room for the King and his friends. However, the room was never used more than by Louis XVI and Marie Antoinette. It was in this very room that a new kind of dining was invented; it was called the "society supper" and was right between the great official dinner and the completely private ones. Around 40 nobles would dine with their sovereigns here - the tables could be extended depending on the number of guests. If the number of guests exceeded the number of seats it was custom that the gentlemen would take their dinner in the Billiard Room next door.

The nickname "the Porcelain Room" is attributed to a yearly amusement of Louis XVI. Every Christmas Louis XVI would use this room to present the newest porcelain from Sèvres - these pieces are still considered some of the most exquisite pieces of furniture and are extremely expensive. 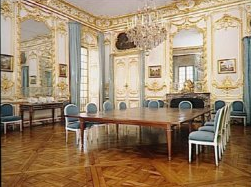 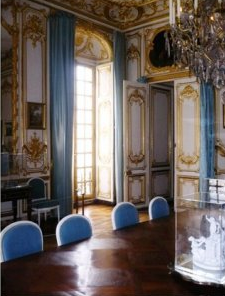 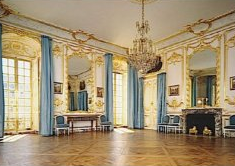 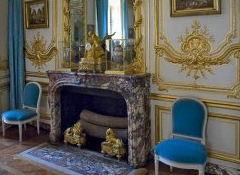 Posted by Louise Boisen Schmidt at 21:51 No comments:

Twelve guardsmen would be placed in this room at all time to protect the Queen - one of these guards warned the Queen's maids on October 6 1789 and in this way probably saved Marie Antoinette from falling into the hands of the angry revolutionaries. It is the landing of the Queen's Staircase also known as the Marble Staircase. This is the only part of the Queen's enfilade that is still the same as it was in the 17th century - the Queen never used it personally so it has not undergone the same transformations as the other rooms belonging to the Queen. The paintings of this room once hang in the Jupiter Room which was later transformed to the War Room in 1680. The largest painting in the room depicts Jupiter being carried in a chariot drawn by two eagles - the painting stands out in its octagonal shape.
The room's walls are completely covered in different shades of marble: black, red and grey marble. It is probably due to this that the Queen's Staircase derived its nickname.
Each of the arches are adorned with a painting - they represent four divine virtues, all illustrated through pictures of the Antiquity. Posted by Louise Boisen Schmidt at 21:28 No comments: Posted by Louise Boisen Schmidt at 20:03 No comments: