This particular salon was of great importance - at least symbolically. Apollo was the god of the sun, the arts and peace and the god that Louis XIV identified with the most - his nick-name "the Sun King" is derived from this.
The Apollo Salon served as the throne room and until 1689 housed a 2,60 metre throne but it was melted down in order to pay for costly wars. All the other furniture - of solid silver - were also melted down. Today a gilded wooden chair has been placed on a dais on a Persian carpet. Like most other rooms of Versailles, this room was decorated with lavish tapestries - in this particular case the tapestries changed: during wintertime they would be made of a lavish red velvet embroidered with gold and silver and during summertime these would be replaced with red silk - also embroidered with gold and silver.

The importance of the Apollo salon is clearly demonstrated through the amazing ceiling painted in colour. These paintings consists of "Apollo in the Chariot of the Sun accompanied by the Seasons" by Chalres de la Fosse. Above the fireplace hangs a portrait with a familiar face - Louis XIV himself. On the opposite wall a equally large portrait of Louis XVI is hanging. 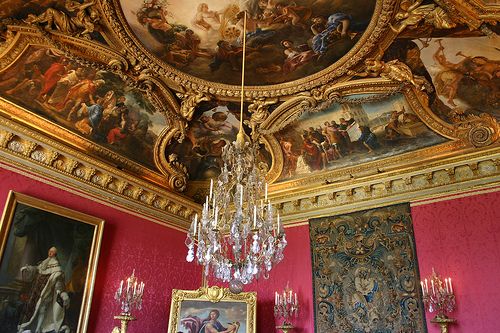 Posted by Louise Boisen Schmidt at 17:45