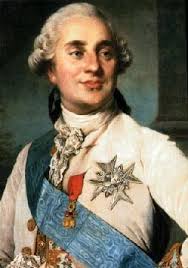 Louis XVI's reign was marked by the French revolution and the following abolishing of the monarchy. Louis Auguste was born on 23rd August 1754 and he became king because of his father's death which left Louis Auguste heir apparent. Louis was a very shy man with a gentle heart but was very indecisive. Unfortunately, Louis never had a strong will-power and was never instructed how to rule because he already had two older brothers and it was therefore thought unlikely that he should need it. But both of the brothers died and Louis became Louis XVI.

The early reign of Louis XVI is dominated by the urge to reform France according to the Enlightenment but the nobility opposed so strongly to these new ideas that the reforms never really succeeded. However, he supported North America in its war of independence of Britain; partly because he was convinced that France needed to show Britain its power.

He married Marie Antoinette in 1770 but his immense shyness kept him from consummating the marriage for seven years. But eventually he had a daugther, Marie-Thérèse Charlotte. Versailles was in ecstasy when a Dauphin was born to the King and Marie Antoinette and that another son was to follow him. But the Dauphin died young leaving his younger brother the heir apparent (the royal couple had a second daughter too but she died after a few months).

The increasing financial crisis made the King and his court very unpopular among his people to an extent that riots broke out due to a shortness of bread that caused the bread prices to rise dramatically - the French revolution had begun. Eventually Versailles was stormed and the royal family taken to Paris as prisoners. The King and his family tried to escape to Varennes but was discovered and the fury of the people increased. In the end Louis was forced to resign his crown. He was arrested and tried at the National Convention by which he was found guilty of treason. On 21st January 1793 he was led to the guillotine and executed. At the very end Louis addressed his people, forgiving them for his death and offered them his deepest wishes that they should never experience the same pain.
Posted by Louise Boisen Schmidt at 21:35