This room served a very specific purpose which gives us an insight into Louis XV's personality. The King loved to hunt and often used hunting to avoid the tedious official ceremonies that he hated so much. His favourite hunting dogs would sleep in this room which has given the room its name! Even some of the decoration has been inspired by his beloved dogs.
The wood-work of the Chamber of Dogs originally adorned Louis XIV's billiard room but Louis XV had that room transferred into a bedroom and moved the wood-work to this room. Above the doors there are beautiful panels decorated with floral panelling made by Jean-Baptiste Monnoyer and Jean-Baptiste Blain de Fortenay.
Three tables were also moved into this room: two of them were originally made for the gilded room next door and the last was made for Madame Adélaïde for her apartments at Compiègne. This room - besides being a comfortable sleeping area for the dogs - served as the first antechamber to the interior apartments of the King. Normally, it was inhabited by the so-called "blue boys" - valets named as such because of the clear blue colour of their livery. 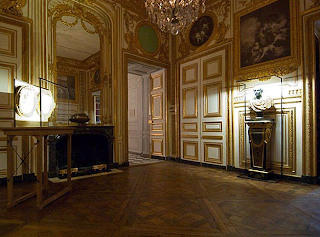 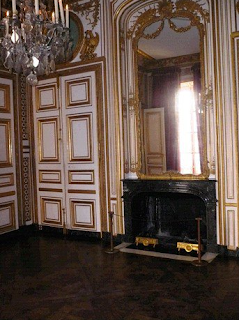 Posted by Louise Boisen Schmidt at 17:04