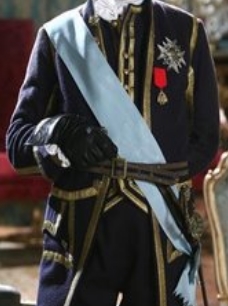 The costume to the right is worn by Antoine Gouy when he portrayed Louis XVI in "L'évasion de Louis XVI" (The Downfall of Louis XVI).

The colour of the long coat is not black as it appears to be at first glance. In the sun-light, you can see that the fabric is dark blue - almost purple. The sash is baby blue (the same sash figured in two previous posts of Louis XIV and Louis XV) - also the brooch on his left appears in these posts. The coat is trimmed with a golden fabric which is also used in the vest he wears underneath.
The lace at the neck has been shortened extremely much since Louis XIV's time and is now merely a decoration.
The red order stands out in contrast to the dark colour. He is also wearing black leather gloves.

This lovely hat is a part of his ensemble. It is trimmed with the same fabric as the coat but the edge of the hat is adorned with white feathers.
Posted by Louise Boisen Schmidt at 16:46

Email ThisBlogThis!Share to TwitterShare to FacebookShare to Pinterest
Labels: film-fashion-louis-xvi