The robe à l'Anglaise was another mayor fashion trend during l'ancien régime. It developed from the mantua gown which had been popular in the first decades of the 18th century. Unlike the robe à la Francaise, the back pleats were closely fitted to the waist - these pleats were placed close to the centre of the back for a narrowing effect.
By the 1780's these pleats were no longer important and the skirt was cut separately from the bodice. The skirt itself made out the volume and was open at the front in order to show off the petticoat - the petticoats were often of the same fabric as the rest of the gown. The sleeves were elbow-long and ended in fine laces that would hang down from the arm. The gown was made to be worn with the characteristic whalebone corset and a pannier. By the 1740's a general rule of thumb was that a pannier for a robe à l'Anglaise was to be as wide as the lady's finger tips could reach. This decreased to about half in the middle of the 1750's.

The most obvious difference from the other types of dresses - besides the lack of hanging back pleats - is the closed bodice. Whereas the robe à la Francaise proudly displays the bodice the English-inspired gown could come in two ways. Either there was a stomacher attached or it was completely closed. This was achieved with pins, lacing and hooks. The gowns were longer than that of a Polonaise gown and as such did not show the ankles. 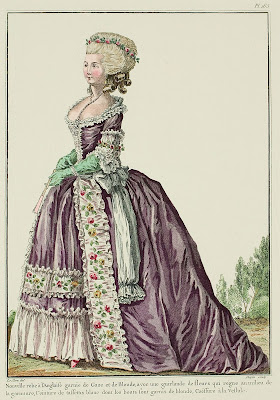 The name simply implies that the style originated in England and it would become a favourite at the English court. It was quite common to wear a muslin fichu with the robe à l'Anglaise.

Not only the nobility wore this style but the bourgeoisie and the peasantry as well. The upper classes had the luxury of choosing between luxurious silks and lovely cottons. It was a style that changed a bit through the 18th century but it never went completely out of style.

Posted by Louise Boisen Schmidt at 14:38