Antechamber of the Grand Couvert

This room derived its name from the court ceremony of the Grand Couvert in which the King and Queen would dine in public; everyone decently dressed could watch their sovereigns eat.

The room itself was designed for Queen Marie-Thèrèse and had not been redecorated ever since. The lower panels are made of marble. Originally the ceiling was adorned with a very large painting by the artist Claude Vignon but now the painting no longer exists. Instead an equally large painting "The family of Darius at the foot of Alexander" by Le Brun. The room was restored in 2010 and the furniture is now as they would have been when the royal family was forced to leave the palace.

The walls are now covered in deep red damask. A large table has been placed in the centre of the room as it would be when the King and Queen sat down for the Grand Couvert. Two famous paintings of Marie Antoinette hangs on the walls including that which includes all her children. Between the large windows a few tapestries is decorating the red damask. 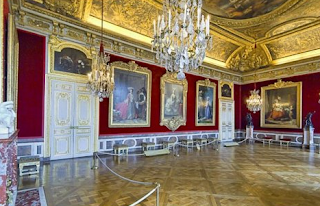 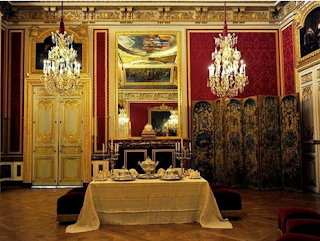 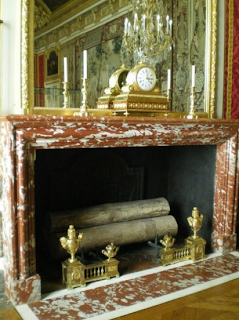 Posted by Louise Boisen Schmidt at 19:37