The King's First Antechamber was expanded alongside the Guards' Room of the King in 1684. The large paintings depicts different Battles of the Antiquity - all painted by Joseph Parrocel. Louis XIV would dine here at ten o'clock in the evening especially when he was seeing Madame de Maintenon. The King would be entertained by musicians who played the symphonies of Michel de La Lande.
Normally the table placed before the King would have a green velvet tablecloth. The ceiling is remarkable when one consider that it belongs to the King's apartments - there are no decorations, no paintings whatsoever. The entire ceiling is kept white and only the cornice is decorated with a golden pattern. The chimney is made from red marble. 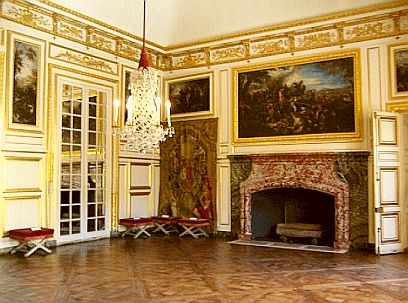 Posted by Louise Boisen Schmidt at 21:05