The Chamber of L'Oeuil de Boeuf

The Chamber of L'Oeuil de Bouef (or Bull's Eye Salon) was made the second antechamber to the King's apartments in 1701. Before it had been a part of the Queen's apartments but after the death of Marie-Thèrése Louis XIV added it to the King's apartments. Here the courtiers would wait to be shown into the bedchamber of their King - the room was guarded by a Swiss guard at all times. The room derives its name from a large oval window; otherwise the room goes by the name of the Bassans Antechamber because of the large number of paintings by the painter Jacopo Bassano.

The famed oval window is framed by a gilded stucco frieze. When Louis XIV wanted to decorate this room he (as usual) spared no expense whatsoever. Large mirrors (mirrors were very expensive), the paintings of "The Fainting of Ester" and "Judith with the head of Holofernes" and lots of gilded furniture was part of the décor used at this room. 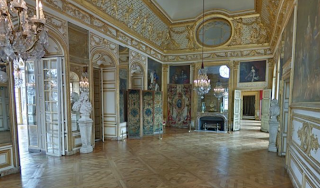 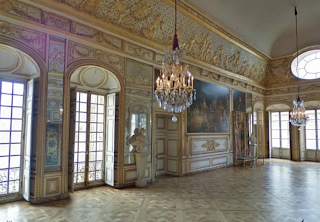 Posted by Louise Boisen Schmidt at 21:10