In 1715 Louis XIV was an old man and it began to show. By August 10 the King was at the small château Marly where he was out hunting. As he returned the King suddenly felt a sharp pain in his leg and the doctor was immediately called for. Dr. Fagon quickly made the diagnosis of sciatica. But the situation changed when black spots appeared on the same leg not long after; this was an obvious sign of gangrene.

Louis XIV suffered from senile gangrene which is very painful and is caused by the collapse of the small arteries' walls which prevents enough blood to circulate. Louis XIV was a monarch to the bone. He refused to take to his bed immediately and insisted on continuing performing his state affairs. Ironically, it was on the King's name day - 25 August - that the ageing King could no longer conceal the pains and remained within his own bedchamber. The doctors could inform him (and the court) that the gangrene had spread to the bones. The King was visited by the 5-year old Dauphin who would soon become Louis XV. During this visit Louis XIV told his heir to keep France in peace for "it is the ruin of peoples!"

Everyone had expected him to pass away shortly after but the King lingered. The King himself knew that his time was running out and asked one of his doctors how much time he had left. The doctor replied that they could hope he would life until Wednesday - it was a Monday. For a short period around 29 August Louis did feel better but it was short-lived. At some point around this time he turned to the weeping courtiers present in his room and said:


"Did you imagine that I was immortal?"

Some of the courtiers must have been tempted to draw that conclusion for Louis XIV had reigned longer than any other French King and with his 72 years on the throne The King went into a sleep-like coma that would last until 8.15 in the morning of 1 September just four days before his 77th birthday. Rumour has it that a clock in his apartments stopped at the exact moment of his death. The King had died, the Sun had finally set.

Shortly afterwards the shout of "the King is dead!" sounded through the halls of Versailles. It was the end of an era dominated by the will-power of Louis XIV. Now his body lay on display for eight whole days in the Mercury Salon for the court to pay their final respects. In the end his body was buried in the Basilica of Saint Denis in the heart of Paris. 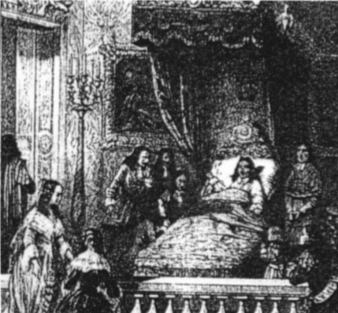 Posted by Louise Boisen Schmidt at 20:58