A Necklace of Queens

This particular necklace is extremely special in one matter: it has belonged to all the Queens of Versailles. It is occasionally called "Marie Antoinette's Pearl Necklace" but I think that is rather unfair considering its history.

Originally, the pearl necklace belonged to Anne of Austria during her regency in the youth of Louis XIV. When she died the necklace passed on to Marie Thérèse as the wife and Queen of Louis XIV. From here on it became the property of Marie Leszczynska and when she died it lastly became Marie Antoinette's.

The necklace consists of 44 natural pearls between 8,7-16,3 millimetres. The largest pearls are located right across from the clasp and the pearls are placed according to their size. It is likely that the pearls are from the Persian Gulf or the Red Sea since these were favoured places to obtain pearls in the 17th century. The clasp itself is made of cabochon turquoise surrounded by no less than 16 small diamonds. 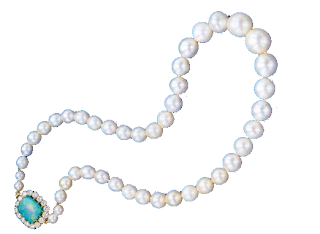 Posted by Louise Boisen Schmidt at 21:45