Jason Schwartzman portrays Louis XVI in "Marie Antoinette" in which he wears this costume in several scenes. The most dominating feature is the metallic blue coat and the matching trousers. The colour is enough in itself which could be why there is no embroidery on the coat as is 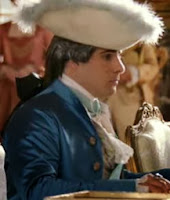 custom. Large baby blue buttons dominates the inner seam instead. The coat is lined with what appears to be white silk or satin. Also, the lace at the end of the sleeves are not as dominating as in other costumes worn by Louis.

In the dinner scene (top photos to the left) he is wearing the royal blue sash but has chosen to discard of it in the more private settings of a gaming night with his brothers, sisters-in-law and wife. The waist-coat makes a nice contrast to the sharp blue colour with its cream-coloured base and golden embroideries. The waist-coat is cut in a manner to make the lace at the neck really come to its' own right. I love the little detail with the pocket watch on the second last photo. On both the top and the bottom photo (two different scenes, by the way) the King is wearing a pendant in the star-shape of an order. The white enamelled star is hanging from a ribbon which matches the royal blue sash perfectly.

Posted by Louise Boisen Schmidt at 14:15

Email ThisBlogThis!Share to TwitterShare to FacebookShare to Pinterest
Labels: film-fashion-louis-xvi