The house of de La Fare had its roots in Languedoc and traces their noble ancestry back to the latter half of the 12th century. At court they held positions such as gentlemen of the King's chamber whereas in the army they had the distinctive rank of Marèchal.
The house split into six different branches of which five were active during the reign of Louis XIV. Since the principal branch became extinct a couple of centuries before the birth of Louis XIV I focus on the other five. 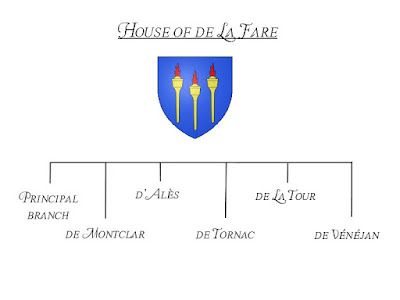 de Montclar
Originated with Antoine, Marquis de La Fare and Vicomte de Montclar who married Marie-Engracie d'Alleman. Together they had eight children of which the second-born son (eldest surviving child), Jean Francois inherited his father's titles. Three of the couple's daughters married into the nobility while one remained unmarried.

The line died out with the death of Francoise Mélanie since none of the daughters had children.

d'Alès
Francois, Baron de Lasalle, was the founder of this branch together with his wife Anne de Cambris, Baronne d'Alès. They had no less than eleven children; five of these went into the church either as abbots or nuns while two died young. Francois was succeeded by Christophe who was elevated to the Comte de Lasalle; none of his two children had children of their own.

The youngest son of Francois and Anne - Jacques Alexandre - became the one to carry the d'Alès-family on. His marriage to Jeanne de Rochemore d'Aigremont in 1728 resulted in a single son whose family received the title of Marquis de La Fare d'Alès.

de Tornac
Founded by Henri, Marquis de Tornac who was married to Isabeau Pelot in 1664. They had seven children of which three died young and another became an abbot. The youngest daughter, Félice, became the Marquise d'Anduze through her marriage in 1705 but did not have children. The eldest son - Antoine Denis Auguste - added the title of Baron de La Fare to their titles. However, the line died out when Antoine had a single daughter who did not have children.

de La Tour
Louis held the title of Baron de La Fare before the de Tornac-branch inherited it. He had married Elisabeth de Gasc with whom he had two children: Louis and Joseph. Louis was made Baron de La Tour and married Francoise de Montmart in 1662. But their only son - another Louis - had two girls who both died in their infancy.

de Vénéjan
This last branch was founded by Joseph (the second son from the de La Tour-branch) who inherited the title of Baron de La Fare. In 1682 he married Jeanne de Pierre de Bernis and had four children. Two of these died young while the other remained somewhat estranged from court life. The eldest son, Francois Gabriel, married Madeleine de Plaisse and had an extensive family.

Francois Gabriel was elevated to the rank of Marquis de La Fare while his great-grandson - Gabriel Joseph Anne Henri - achieved the greatest honour of becoming a Duc.

The line died out in 1925 when the last member - Marie Thérèse - died.

Posted by Louise Boisen Schmidt at 23:12