Tracing their roots from the region of Champagne the House of Choiseul were descendants of the Comtes of Langres. The founding head of the family was Renaud III de Choiseul who married into royalty when he in 1182 wedded Alix de Dreux, daughter of Louis VI. No less than 10 branches extend from this family as can be seen below. 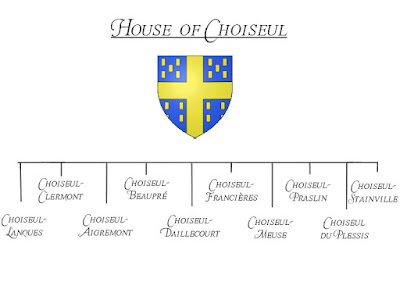 As I usually do, I will focus on the family members that were alive during the period touched on by this blog.

The foremost here is Étienne Francois, Duc de Choiseul (from the Choiseul-Beaupré branch) who rose to power due to the patronage of Madame de Pompadour. She ensured that he got first a position in Rome where he did so well that he was transferred to Vienna - the capitol of France's archenemy. Eventually, he was made Minister for Foreign Affairs but the disastrous Seven Years' War had made him unpopular and he was forced to retire. He was also one of the leading forces in setting up the marriage between Louis Auguste and Marie Antoinette.

César Gabriel de Choiseul (of the Praslin branch) is another person worth mentioning. He served as Secretary of State - officially holding the post of Minister of Foreign Affairs which was actually controlled by Étienne Francois. He would later enjoy a great deal of success as Minister for the Navy which he managed to rebuild.

Both Etienne Francois and César Gabriel found themselves unable to continue in their positions after the death of Madame de Pompadour.

Another César, Duc de Choiseul served in the army and achieved the rank of Marèchal du Plessis-Praslin. He also went on several diplomatic tours. He gained the lasting trust of Louis XIV when he - during the Fronde - remained loyal to Anne of Austria and defended her and her sons from Turenne with a good deal of success. As a reward he was granted a number of high-ranking positions in the government of Louis XIV including Minister of State. He was also the first Choiseul to be made a Duc.


Posted by Louise Boisen Schmidt at 16:20