Louis XVI commissioned a huge service counting 445 pieces from Sèvres in 1783 but only about half was finished when the King was executed ten years later. From the start it was estimated that the service would take 23 years to complete. Sèvres used their most experienced workers for this service but still a decorative plate would take 12-15 months to finish. Combined, the service was the most expensive ever created at Sèvres with each plate costing 480 livres! In comparison the service of Catherine II of Russia cost 242 livres per plate while the service delivered to the Comte d'Artois cost a "mere" 60 livres per plate. In total the cost was estimated at 164.390 livres where just 7000 would be paid off annually! No wonder it took such a long time.
The final payment was registered on 13 January 1792 when the royal family was still in captivity.

The overall theme of the decorations are mythological scenes which were carried out by various artists including Claude-Charles Gérard (Head of paintings at Sèvres), Claude-Antoine Didier and Charles-Nicholas Dodin. Despite the huge sums spent on the service, no new shapes were created for it. Actually, the shapes for the wine coolers and such was 40 years old. The service includes two kinds of plates: those you eat off and those you show off. The plates with detailed "paintings" were not used for eating since the knives would destroy the precious painting. Instead, plates with a completely clear centre was used and to compensate the edges were adorned with elaborate, golden foliage. 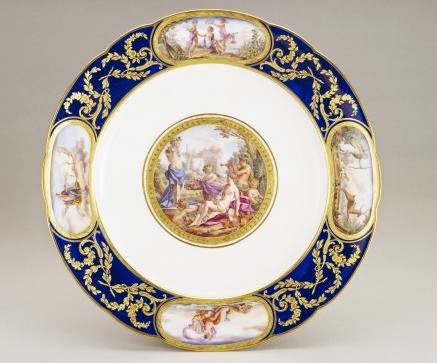 In 1811 it was bought by George IV and remains in the English royal collection.

Posted by Louise Boisen Schmidt at 18:17

Email ThisBlogThis!Share to TwitterShare to FacebookShare to Pinterest
Labels: louis-xvi-sevres