Built by Le Nôtre between 1671 and 1674 it was one of the most elaborate pieces of the garden. As such it became the favourite grove of Louis XIV. It would be used for outdoor theatrical performances which were a great favourite with the Sun King's court.

Sadly, for the Water Theatre Grove, neither Louis XV nor Louis XVI had any particular fondness for the grove and it was left pretty much to itself after Louis XIV died. It was not until 1775 Louis XVI had the Grove completely demolished and gave way to a large, circular lawn. The fate of the Grove was further damaged in the 1990's when two successive storms further damaged it and ever since it has been a storage area.

Recently, Louis Benech was chosen to give the grove a new look and restore it to match the rest of the park.

Since the original garden is long gone we have nothing but these contemporary drawings of the layout to show for it. 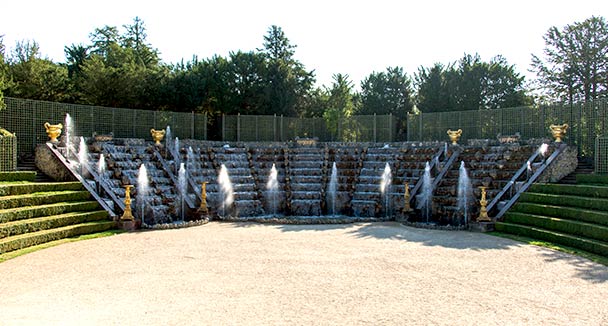 Posted by Louise Boisen Schmidt at 18:49