Strongly influenced by his mistress, Madame de Pompadour, Louis XV placed an order of a full dinner service at the Sèvres factories in 1751.

The set was delivered in intervals, the first arriving at Versailles in December 1753 and again in December 1755. In 1757 a few more items arrived. In total no less than 1.749 pieces were created for this collection! The accompanying bill is matches the enormous amount of items and in the an astonishing 82.272 livres!
In 1757 the King sold a part of the collection to his courtiers but kept the lion's share for himself and his family. Among the courtiers there was a great desire to possess such a piece not only because it came from the King but because it was the first time such a blue colour was used on porcelain.

For this order - unlike anything ever experienced at Sèvres so far - a new colour was invented. Eventually, the artists drew their inspiration from the ceilings of Versailles. When André Le Nôtre painted these he had the background painted in a deep sky-blue which had become known as the "bleu celeste" (heavenly blue) or "le bleu de roi" (the King's blue).

Louis XV had the service installed at the château de Vincennes. 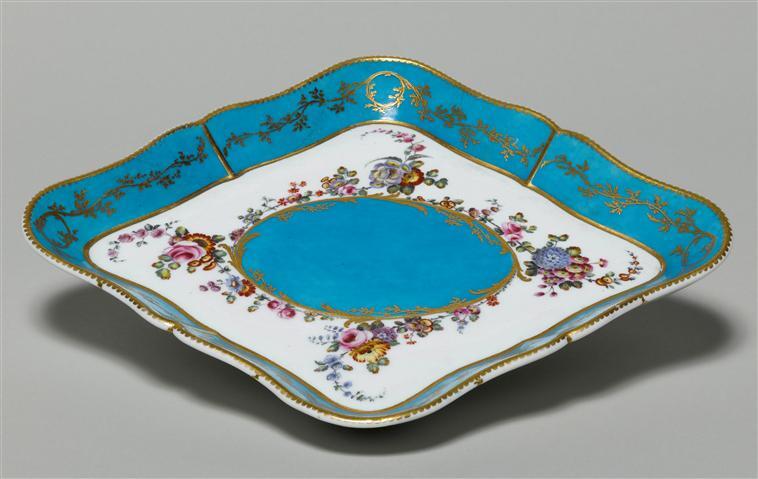 The service was first put into use at a dinner party on 4 February 1754. The Duc de Cröy described the scene as such:

"The King made us unpack his beautiful blue, white, and gold service from Vincennes, which had just arrived from Paris, where it had been exhibited for the connoisseurs to admire. This is one of the first masterpieces of this new porcelain factory which is to surpass Meissen."


Jean-Claude Duplessis had a hand in the shape and design of many of the pieces. Louis XV much appreciated his contribution and made him the King's goldsmith a few years later in 1758. The service was so popular with the King and his family that it remained in use until the end of the Ancien regime. Today, some pieces can be found in the porcelain dining room while others have been sold off at auction to private collectors.
Posted by Louise Boisen Schmidt at 20:19