The English Garden, designed by Richard Mique, took the place of Louis XV's botanical garden. The English style was wilder and more natural than the straight lines and methodical design that was characteristic for the French garden. As the works of Rousseau became more and more popular, so did this style and Marie Antoinette was more than pleased to be able to break the rather stiff garden design that were usually the style at Versailles.

The English Garden contains these:

Finished in 1777 by Richard Mique, the Belvedere is decorated by Deschamps who chose a frieze decorated with fruits and flowers. Also, hunting and gardening are depicted in detailed pediments while the windows refers to the seasons. The Belvedere consists of one large living room with a mosaic floor designed by Le Riche.
The Belvedere is located such as to be overlooking the lake; the style of the exterior is inspired by the Asian padogas.

The Love Temple is one of the most recognizable aspects of the English garden and is visible from the Queen's Bedroom in the Petit Trianon. Richard Mique completed the design for the temple which was finished in 1778 and made entirely out of marble. Once again Deschamps was called in to decorate the temple which was dedicated to love, particularly the love between Louis XVI and Marie Antoinette. Of course, Cupid is a central figure in the design.
When Marie Antoinette hosted parties here the temple functioned as a key figure in theatrical performances. The Rock, Snail Monument and The Grotto

The Rock was quite difficult to create (being completely out of place in the gardens) and was not finished until 1782. It was designed in such a way to allow water to cascade down the rocks and into the lake. The Rock is located right next to the Belvedere. 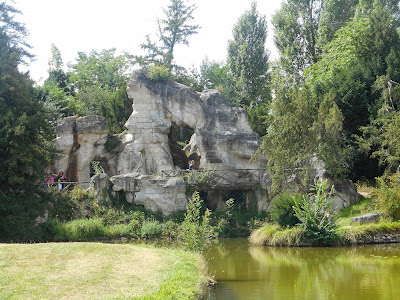 From the Grotto a little gap in the rocks Marie Antoinette could see who was coming. In those cases when she did not quite want to talk she could always escape down a little staircase. Marie Antoinette considered this shaded and secluded little spot one of her favourite places in her gardens. In fact the entrance itself was difficult to detect for a newcomer. Legend has it that Marie Antoinette was sitting in that exact spot when she was informed that a mob was headed towards Versailles... 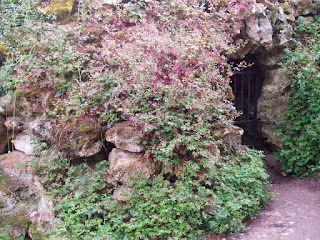 Posted by Louise Boisen Schmidt at 21:13