The Hôtel d'Aumont served as the main seat of the Ducs d'Aumont from 1656 when it was purchased by the then Duc d'Aumont. D'Aumont summoned some of the greatest artists of the time to complete the décor including François Mansart, Charles Le Brun and Simon Voet. Even André Le Nôtre was hired to carry out a French garden.

The Hôtel was given a make-over in the early 18th century. In the end the Hôtel only remained in the d'Aumont-family's possession for exactly one century. It was sold in 1756 by the fourth Duc d'Aumont who had gotten the Hôtel through his marriage to Louise-Marie- Augustin d'Aumont. The following owners were not as prestigious as the d'Aumonts. Pierre Terray was the owner until 1795; he held several positions at court but was not himself a nobleman.

Today it is a property of the City of Paris which uses it as an administrative unit. 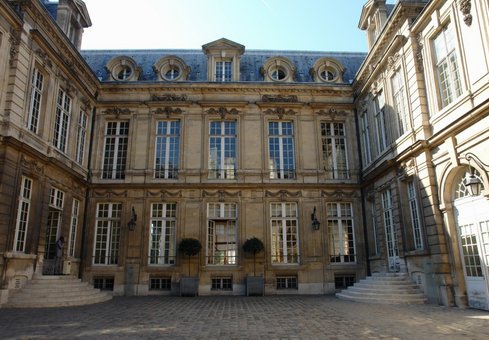 Posted by Louise Boisen Schmidt at 16:40