The term "redingote" really refers to both a male and female type of garment; this post will concern itself with the latter. The word itself is derived from the English "riding coat".

Originally, the redingote was a coat which was used out of doors. In the early 18th century it was a bulky type of clothing; this is typical of a fashion which was originally adopted by women for its practicality's sake - and then evolved. It was not until the last two decades of the 18th century that the redingote gown became a fashion statement in itself. By this time it was  closely fitted to the waist. As with a good deal of ladies' fashion it was inspired by men's fashion.

As a garment is was an incredibly versatile style. It could be used both for more sporty activities such as hunting or promenading and for society gatherings. A redingote was intended to be worn over a corset, a skirt and a petticoat; the skirt itself was quite voluminous. This large skirt gave it the gown-like appearance that made it acceptable in the salons as well as outdoors. Occasionally, the petticoat was separate from the skirt. Some redingotes were cut open in the front to show off the skirt underneath.

Generally, a redingote gown was cut with long sleeves. Several aspects of the male fashion reappeared in the female counterpart. Ruffles at the end of the sleeves as well as a prominent collar were both traditionally male. Also, it was common for a redingote was double-breasted; most people recognize the cravat of 18th century male costumes. A similar type of garment was fashioned to go with the redingote.

Depending on whether the wearer used her redingote gown for a more formal event or during her leisure hours, a train could occasionally be attached. The types of fabric also illustrates the versatility of the style. Everything from delicate silks to more enduring wool could be used.
This dress is c. 1790 and is made from silk and cotton. It is one of the less formal redingote gowns which has neither embroidery nor train: 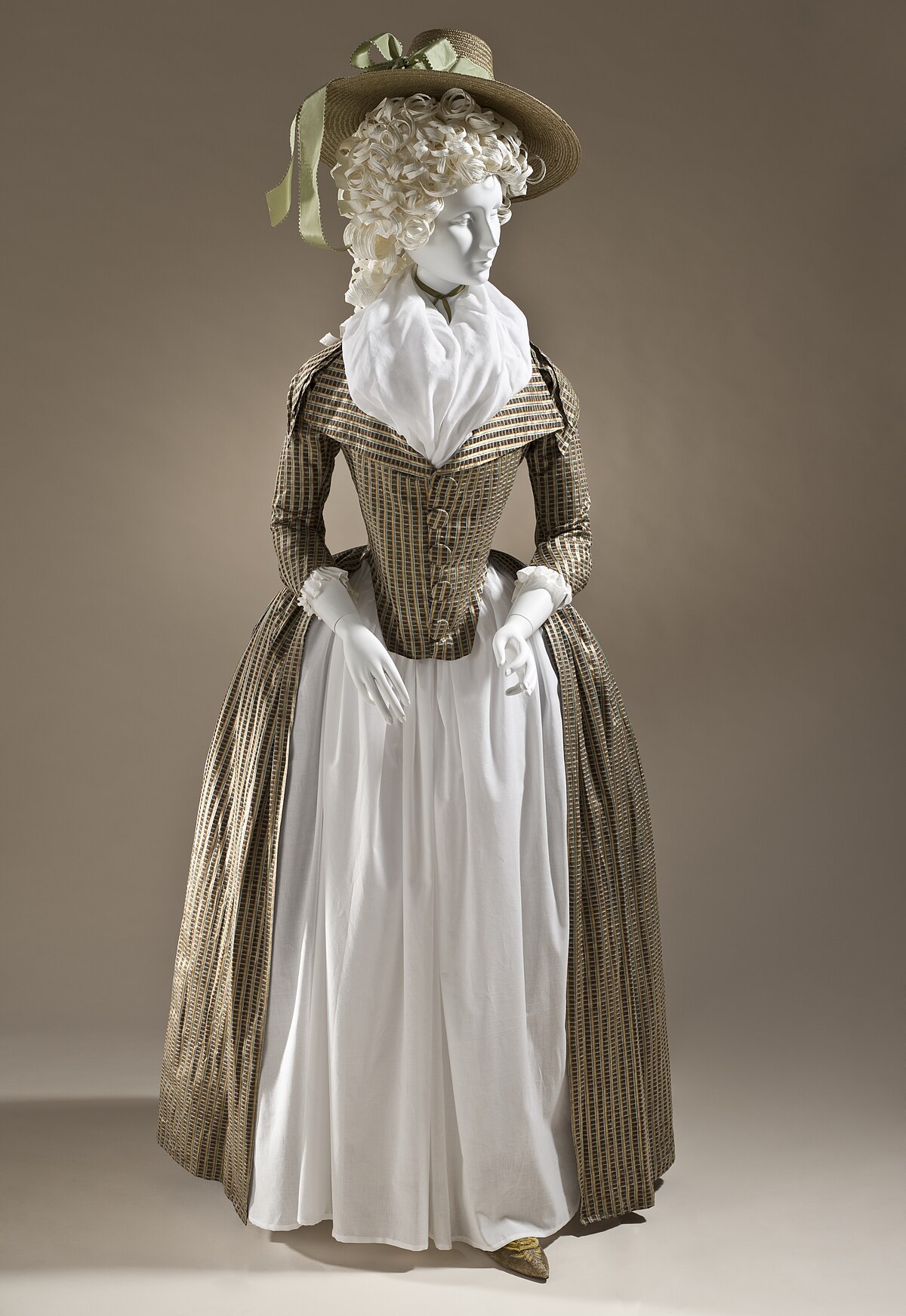 The decoration was mainly centered around large buttons and cuffs and collars in contrasting colours.  The redingote worn at court would often be adorned with embroidery; this would be delicate embroidery compared to the larger pieces seen on other court gowns. The green redingote beneath is a perfect example of how a redingote could be "dressed up".

Marie Antoinette was fond of redingotes; she would often wear them at the Petit Trianon. One particular redingote of hers caught particular attention - it was of a pale grey taffeta. The redingote was connected with German style in the minds of the French; perhaps this also played a role in the Queen's fondness for it? On the night that Versailles was stormed the Queen had just time to put on a yellow redingote before she was obliged to flee through the secret door in her bedroom.

Posted by Louise Boisen Schmidt at 15:46