The tall wigs towering high above the head and adorned with everything imaginable remains on of the things we associate the 18th century with. Today, we look at these hairstyles with a mixture of wonder and ridicule. But even when the fashions were at their height they were certainly not accepted by everyone. Caricatures spread like wildfire of highborn ladies wearing wigs too tall to keep under control; naturally, these were particularly popular amongst the lower classes. Wigs were often adorned with everything from flowers to small boats and birdcages. This may very well have been the inspiration for this caricature. The gentleman to the far right seem to regret his decision of pocking the wig when an array of items come tumbling down at him.
While it is completely true that ladies occasionally had to crouch down in their carriages (as seen below) to fit it is doubtful that they ever needed someone to hold their do's up with a stick!

Fashion generally came from France which this caricature clearly shows. The "French Lady" in London gives the gentleman a good fright when she suddenly emerges in what can only be described as a monstrous contraption. Notice how even the animals flee! "Lady All-Top" must have a remarkably strong neck and quite a headache! Notice that her coiffure is larger than she is - even her plumes. Here is another lady who needs to bend her knee so as to not ruin her expensive hairdo. This particular caricature is French and most likely refers to a court lady - notice the intertwined double "L"s which adorned the king's gates. Perhaps she is going to a court ball?

The court wigs generally reached their peak in the 1770's but was not completely gone by the end of the 1780's. This caricature attempts to explain how a proper coiffure was to be made; apparently one needed to erect a scaffold which would then be removed. The hairdresser is all but compared to a carpenter; the hairpins and accessories are scattered around him like tools - and in case that point was not made clear there is a painting of a bridge in the background. Oh, the dangers of fashion! This unfortunate lady seems to have walked a little too close to the chandelier and has consequently caught on fire. The only redeeming thing seems to be that she is not aware of her new "enlightened" state. After all, there is quite a bit of hair to burn through before the scalp is reached. Behind her and her companion, servants are desperately trying to quench the flames. 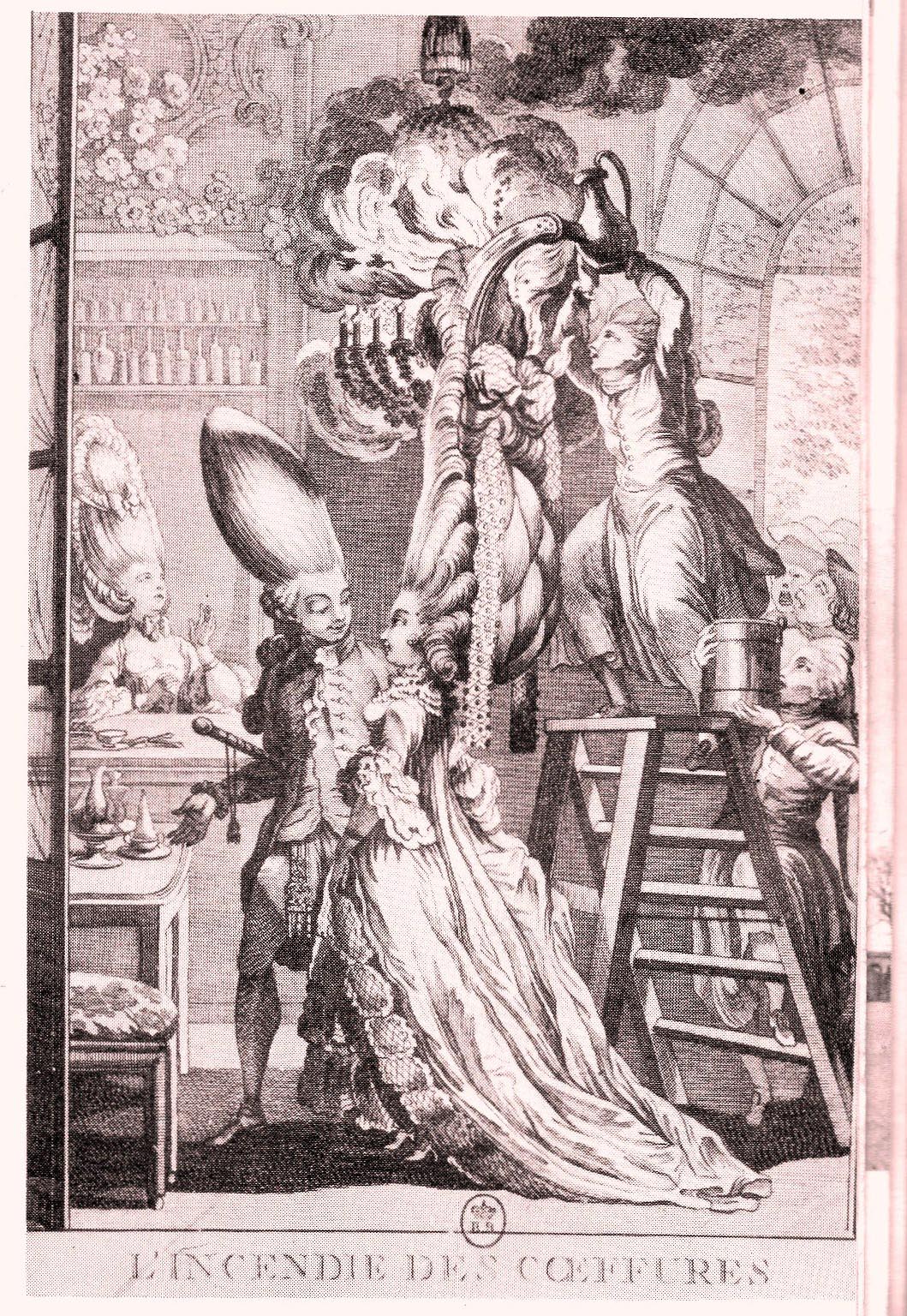 This is a rather late caricature considering that - at least in France - the high coiffures had not been worn since the fall of the monarchy. Nevertheless, the image is quite clear.

Height is the essence here. The coiffeur needs a ladder to complete his masterpiece while the other gentleman (the assistant?) checks the angle using a sextant. Meanwhile, the lady looks rather pleased with her fashionable hairdo. One thing that stands out in this one is the white shawl draped over the lady's shoulder to protect her gown. It could be that the coiffeur is using heated curlers to make those perfect curls?

Ladies were not the sole target for these ridiculing cartoons. Gentlemen, too, could find themselves in the same situation; as was the case here. "Baron du Caprice" has styled his hair so tall that he can only get in by having the door made taller - apparently he never considered bending his knees as the ladies above... Posted by Louise Boisen Schmidt at 21:30