The Château de Louveciennes was the final residence of Madame du Barry after the death of Louis XV which conclusively ended her career at Versailles. It was to here that she retired after having first been exiled to a convent by the new King Louis XVI. 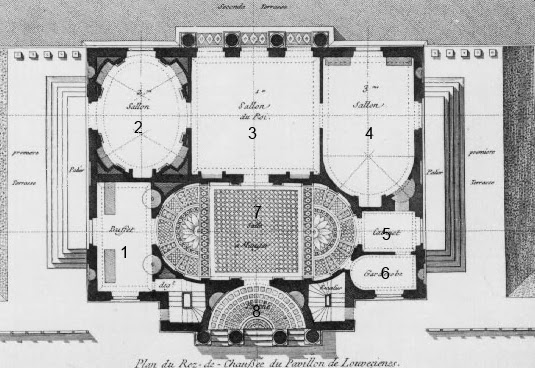 The floor plan above lays out the pavilion and since the words can be difficult to make out I have placed numbers 1-8.

I could only find a very small image of the first floor, but here it is: 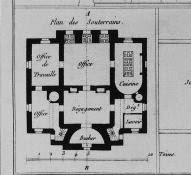 Louis XV presented it is a gift for his young mistress in 1769; previously it had been the property of the crown and only courtiers directly related to the monarch had been allowed to reside there including Mademoiselle de Clermont (granddaughter of Louis XIV) and the Comtesse de Toulouse (aunt to Louis XV). The latest inhabitant had been the Prince de Lamballe, husband of Marie Antoinette's favourite Princesse de Lamballe. The château was expanded and redecorated by the court architect Jacques-Ange Gabriel whom Louis XV was more than happy to let his mistress borrow. He would often come there after his hunting expeditions.
Claude Nicolas Ledoux built a neo-classical pavilion in the garden which was inspired by a Roman temple - today it is still called the Pavilion du Barry. On the 22 September 1793 Madame du Barry was arrested while staying here and taken to Paris where she would be executed later that year.