The Gardens of Versailles

Louis XIV employed André le Nôtre as his royal gardener in 1661 and the work began immediately - it would be 40 years before they were complete. Le Nôtre was assisted by the men who created the palace: Charles le Brun designed most of the fountains and statues, Jean-Baptiste Colbert directed the project from 1664-83 and Jules Hardouin-Mansart designed the Orangery.

The work was not easy. To accommodate the plans insisted on by the King tons of earth had to be moved and the ground levelled out. What was formerly mushy marshland was transformed into flowerbeds, fountains, canals etc. It took thousands of men to complete the project and remember that all that dirt had to be moved by wheelbarrows! For the King's dream to come true trees of all sorts were imported from all over France and planted in a carefully designed pattern. Since it would be too long a post if I were to list all of the features of each park - anyone who has been there knows how enormous it is - I have chosen the same pattern as used for the château.

The garden is usually divided into two categories: that of the Gardens of Versailles and that of the Domain of Versailles. The difference is that the domain counts all the land connected to the palace whereas the gardens only cover the immediate ground behind the castle (the figure beneath is just the gardens).

The turquoise circles represents the mayor fountains and the red marks the gardens: 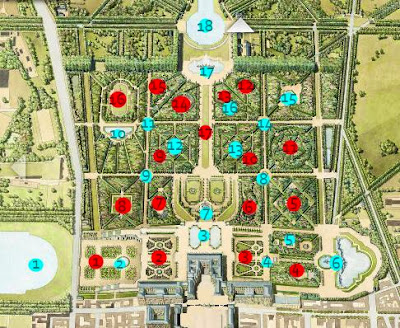 Posted by Louise Boisen Schmidt at 18:23