The Southern Parterre is easily recognizable by the massive array of flowers; actually le Nôtre was not that fond of flowers and often complained to the King of what he saw as an unnecessary display of them but he was overruled. It is connects the Orangery with the two Basins; however, the ground level of the Orangery is slightly lower than that of the Southern Parterre and as such is reached by a few steps.
The entrance into the Parterre is flanked by two of the oldest statues in the park: that of Eros and a Sphinx. The statues were created by Louis Lerambert who worked together with Jacques Sazzarin.

During Louis XIV's time the South Parterre was filled with citrus-plants which filled the air with a delightful scent. Actually, these citruses were a part of a scheme to show the world that France no longer stood in the shadow of Italy when it came to exotic plants and their maintenance. In 1674 Colbert had tuberoses, jasmine and jonquils imported from Marseilles. Besides citruses quite a lot of palms could be seen in this part of the garden. This is also why the garden is called the Parterre du Midi (and surprisingly not from the Aisle du Midi or Southern Wing) since "the Midi" is referring to that southern part of France where such exotic flowers. Thus the Southern Parterre became symbol of the King's wide-reaching power and wealth. 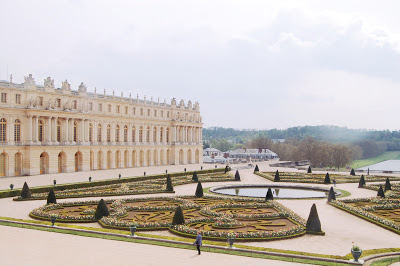 Posted by Louise Boisen Schmidt at 21:14