The Bourbon dynasty spread itself out in quite a few branches - like every other family - besides the royal family itself. This post is about the the families that also descended from the Capetian dynasty but were not members of the immediate royal family. 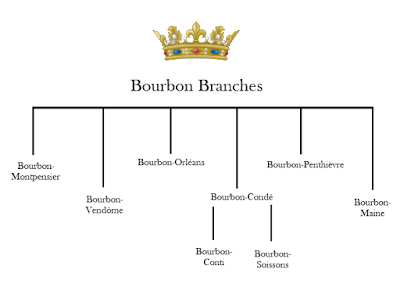 The name is derived from the main title held by the house; that of Prince de Condé. Originally, the family line began in 1557; since then the Princes and Princesses of Condé were:


The house died out two lines after the last mentioned here but since the last two lived after the ancien regime they are not included.
Both the sub-cadets of Bourbon-Soissons and Bourbon-Conti are descending from this branch.

Besides these court titles the head of the family was the First Prince of the Blood which meant that he was addressed as Monsieur le Prince at court and his wife as Madame la Princesse. However, the title was transferred to the House of Bourbon-Orléans in 1710 and from then on the heads of the Bourbon-Condé house went by Monsieur le Duc.

The Princes and Princesses of Conti were:

Founded by the first son of Louis XIV and Madame de Montespan, Louis-Auguste, who was legitimised and given the title of Duc du Maine. However, the title did not pass on to his children who were instead given other titles.

Jean Gaston d'Orléans did not marry

Marie Anne d'Orléans did not marry

This branch was the most powerful during the reign of Louis XIV and Louis XV because of their close relations to the crown. Should the royal family had died out - as it almost did in 1712 - the house of Bourbon-Orléans would have succeeded to the throne.
In 1709 the title of First Prince of the Blood was transferred to this cadet-branch.

The line began in 1566 when it was bestowed on another son of Louis de Bourbon, Prince de Condé whose name was Francois de Bourbon. At court they were known as Monsieur le Comte and Madame la Comtesse. In 1641 the male line died out and the title was passed on to a sister of the former holder who was married into the house of Savoy. As such the title came to be intertwined with that of the Savoyard royal family.


The Comtes and Comtesses de Soissons were:


The house went extinct in 1734 since Eugène-Maurice and Olympia had no issue.

The second House of Bourbon-Vendôme was founded by the legitimised son of Henri IV and Gabrielle d'Estrées, César de Bourbon.Once César had been made legitimate he was granted the title of Duc de Vendôme.

Ducs and Duchesses of Vendôme:

Philippe de Bourbon-Vendôme did not marry

The house went extinct in 1727; after that it was used as a courtesy title by the Comte de Provence, brother of Louis XVI

Email ThisBlogThis!Share to TwitterShare to FacebookShare to Pinterest
Labels: blood-prince