House and Cadet-Branches
The House of Rohan is from Brittany and claims their descent from the earliest Kings of England. At court the Rohans were given the title of Prince étranger or Foreign Prince - an honour only a few families who permanently resided at court had. 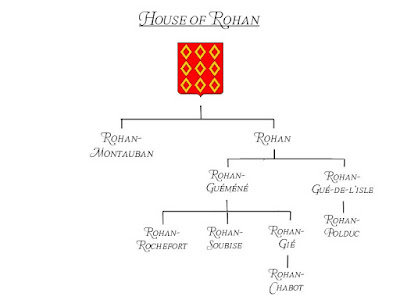 Of these the lines of Rohan-Chabot and Rohan-Rochefort are still existing while the others have gone extinct.

In an attempt to keep the history of this house as understandable as possible the following alliances, titles and family members are divided into the different branches.

Rohan-Guéméné
Dating back to 1375 the branch of Rohan-Guéméné is the result of the union between Jean de Rohan and Jeanne d'Évreux (also known as Jeanne of Navarre).

For alliances and titles see Rohan-Chabot

Rohan-Polduc
A cadet-branch of the Rohan-Gué-de-l'isle it was established in 1500 and died out three centuries later in 1800. The family never became prominent at court due to their participation in the Pontcallec conspiracy after which they went into exile in Spain.

Since the surviving members of the Rohan-Rochefort family are the eldest survivors they maintain all the titles previously scattered between the different branches (Prince de Rochefort, Prince de Soubise, Duc de Rohan-Rohan, etc.)

Alliances through marriage (the first is the member of Rohan-Rochefort):
Charles de Rohan-Rochefort - Éleonore Eugénie de Béthisy de Mézières = 3 children (the current House of Savoy are directly descended from this couple through their daughter)

Rohan-Soubise
Sprung from the branch of Rohan-Guéméné the line began in the marriage of Francois de Rohan and Anne de Rohan-Chabot. Anne bought the Lordship of Soubise which was made a principality in 1667 - court gossip would have it that Louis XIV did it to please her since she was then his mistress.

Rohan-Gié
Originally from 1541 this branch was caught up in the religious wars in France during this period. The family was Protestant and supported Henri IV who rewarded them with the Duchy of Rohan. The family is thought to have been swallowed up in the union of Marguerite de Rohan (herself a member of Rohan-Gié) and Henri Chabot.

Rohan-Chabot
Descended from the Protestant Rohan-Gié branch in 1645 Marguerite de Rohan married the Catholic Henri Chabot which ended the former line and created that of Rohan-Chabot. From then on the Rohan-Chabots were Catholic. It should be noted that this is the only Rohan branch to descend through the female line.

Posted by Louise Boisen Schmidt at 22:33