Not every Dauphine was as fashion-minded as Marie Antoinette. The Savoyard Adelaide (or Marie-Adelaide) was Dauphine through her marriage to the Duc de Bourgogne and had from the start been favoured by Louis XIV himself who could find but one flaw with the boisterous young lady: her sloppiness. 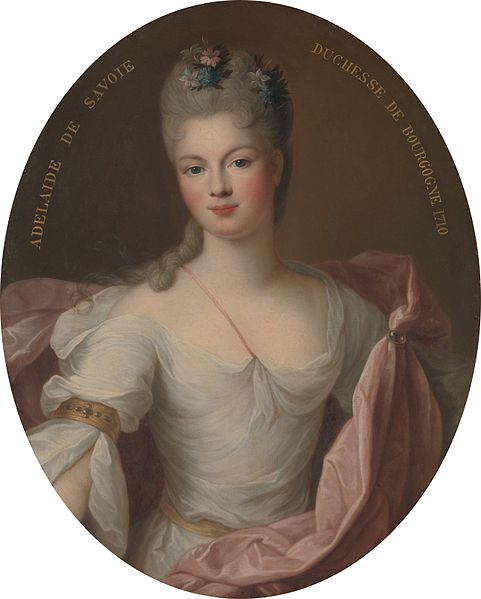 Adelaide had no interest whatsoever in neither fashion nor public display of grandeur. And if there was one thing Louis XIV could not stand in a woman then it was sloppiness towards appearance; after all he had become accustomed to be surrounded by beautiful, polished women. Today this would hardly have drawn any attention but amidst the glittering ladies of Versailles it stood out like firework on a dark night-sky. When Adelaide became pregnant she went so far as to ditch her corset! On this her husband backed her up pointing at the importance of her being comfortable.
She was soon reprimanded for this unbecoming behaviour with the words: "Your untidiness displeases the King". Surprisingly enough this did not scare Adelaide very much and she eventually agreed to a compromise: before she went to her visits to the King she would adorn herself with the gorgeous gemstones and jewels that came with the title of Dauphine and when she left she would take them off.

It seems strange that even someone destined for so great a position as the Queen of France took so little interest in what the court thought most highly of: appearance. Perhaps the history of France would have look very differently if Adelaide had lived to ascend the throne.
Posted by Louise Boisen Schmidt at 07:52