This room was once a place filled with mysteries and technological wonders. When Louis XIV reigned at Versailles this was his Cabinet des Curiosités but every trace of what once was is now long gone. Louis XVI used it instead as his Games Room which is what the room has been restored to resemble. During his reign this would be a place to gather after a meal for a cup of coffee for the close friends and family - the King himself would often play backgammon in this very room. Riesener provided the four corner cub-boards in 1775 and the beautiful chairs are the work of Boulard in 1785.
The small paintings on the walls were actually chosen by Louis XVI himself and all depicts military victories of his grand-father, Louis XV. Previously this room also served as Madame Adélaïde's antechamber. The fireplace (cut from marble) is not the original but has been created to resemble the original the most. 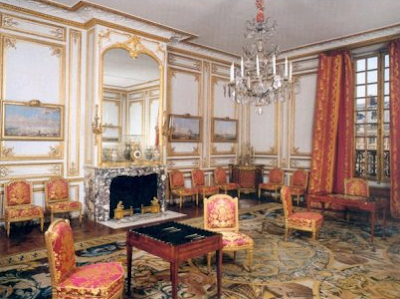 Posted by Louise Boisen Schmidt at 23:03