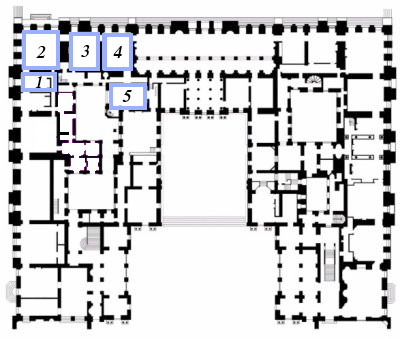 This room served as a library to Louis XV's son and later on to Louis XVI when he was Dauphin. Louis XVI's mother also inhabited this particular room prior to her death. The very taste of Louis XV is clear throughout the decorations of his son's library; many of these consists of angels playing instruments - music was always a great comfort to Louis XV. The panelling - of wood - dates back to 1755. Joseph Vernet painted the sea landscapes on the four over-doors.
The furnitures of the library counts a chest of drawers - containing a golden clock - by Criaerd and a writing table dating from the year of 1756 and commissioned for Louis XVI.

In order to create a perfect symmetry in the room, the many "books" are in fact merely pieces of books. The glass "cabinets" for books are lined with blue silk. The Grand Cabinet of the Dauphin was originally divided into three different rooms: a study and bedroom for Monsieur and a study for Madame. Monseigneur took over the apartment next until Louis XIV (ever eager for changing his palace) had the three rooms combined into one big apartment for the Dauphin in 1693. Louis XV's (for whom the reconstruction had been done) decided to entirely change the décor of his Grand Cabinet. He only kept the fireplace and the panelling - both done by Verbeckt.

The Dauphin wanted paintings of three of his sisters (Madame Adélaïde, Victoire, Élisabeth and Henriette) and appointed Nattier to perform the task. Today these paintings are no longer in France and has been replaced by paintings by Charles-Joseph Natoire that formerly hung in the princes' apartments at Versailles and Marly. As always, the Dauphin was to have the finest furniture. The writing desk was delivered by Antoine-Robert Gaudreaus but the seats were not created for the Dauphin. Instead they used to occupy the apartment of the Duchesse d'Harcourt. One of the most spectacular objects in the room is the globe - or two globes to be precise.
The inner globe shows the coastlines and heights and depths of the ocean - it was created by Mentelle 1786. The outer one depicts the terrestrial and celestial globe. Besides Mentelle, Vernet and Gardeur were also appointed to finish the globe. It was ordered by Louis XVI who intended to use it for the education of his son, the Dauphin - Louis XVI himself was very interested in geography and probably enjoyed the globe very much himself. A console table (now classified as a part of the French National Treasure) was created for the Dauphin (son of Louis XVI) in 1787. The decoration of the Dauphin's Bedroom is from 1747. Originally, there was a small room where the Dauphin would exhibit his paintings - that is why the tapestry suddenly changes from green to white and gold. The original bed of the Dauphin has been lost and the exhibited bed is in the style of "la Duchesse". The bed was made in 1740 for the Duchesse de Creéquy and embroidered in Saint Cyr. Meanwhile, the globe on the dresser was made for the Duc de Chartres in 1705.

Gabriel designed the drawings for this room and later he also designed the decorations. At that time the alcove was hung with silk and the walls were covered in oak planks. When the revolution broke out this room was occupied by the son of Marie Antoinette and Louis XVI - he would later be remembered as Louis XVII. Also Marie Thérèse spent some time in these rooms at the time. Most of this room was previously a part of Monseigneur's apartments at Versailles and were known to be one of his most elaborately decorated rooms. No expenses had been spared and the results were Monseigneur had his and his wife's interlacing initials inlaid in the parquet floor that was designed for the room. Large mirrors in ebony frames and copper and pewter marquetry are a part of the lavish décor. On the wooden tables pieces of china and rock crystals have been placed.
The room was further expanded in 1747 to the full size we see today - sadly the extremely lavish décor was removed in favour of simple panels. The present portraits in this room is of the Mesdames (daughters of Louis XV) and are all done by Jean-Marc Nattier.

Today, the First Antechamber of the Dauphin is noticeable in the obvious lack of furniture. There are no chairs or cabinets placed in the room. One of the walls is dominated by a large window facing the Cour de Monseigneur and the rooms leads one on to the Second Antechamber of the Dauphin. The two minor windows were added to the room on the order of Louis XVI who wanted to create a connection between Marie Antoinette's chambers and the Dauphin's. One of the doors leads up to the Chamber d'Oeuil de Bouef. When the palace was stormed on the night between October 5-6 Louis XVI used this passage to reach his children.

The main décor is very simple; the panels are white with a golden edge. The paintings as well as the mirror is framed in golden frames. The only other pieces of furniture is a fireplace and a simple chandelier. 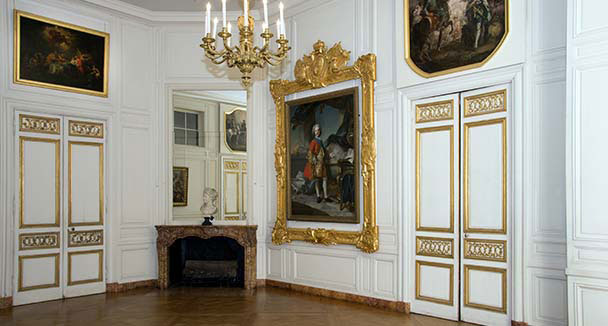 Posted by Louise Boisen Schmidt at 22:40