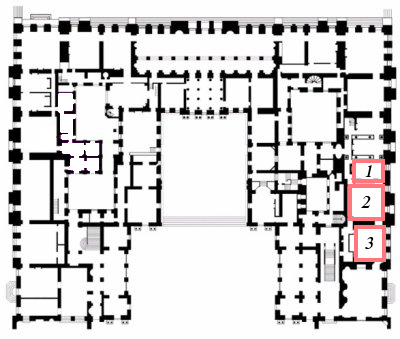 Several members of the nobility used this room for different circumstances - including some of the King's favourites. In 1724 Madame de Montespan took over the room and in 1764 Madame de Pompadour died in this room. It was intended that the room should then be occupied by the Dauphine Marie-Josèphe of Saxony but she died before she could ever use the room - she lay in state in this room as well. Madame Victoire then took over the room before it was passed along to Madame Adélaïde in 1769.

The wood-work was commissioned for the Dauphine who sadly never had the chance to enjoy it; only the overdoors' frames are still the same as they where when Madame de Pompadour used this chamber. Portraits of Louis XV by Charles van Loo and the Mesdames Sophie, Victoire and Louise (both by Drouais) are used to adorn the walls. Madame Adélaïde had a bust of her brother, the Dauphin, placed on the marble chimney. The chairs were created in 1770 just a year after Madame Adélaïde took over the room. The wood-work on the white panels are exquisite and inspired by flowers. Unlike many of the other ceilings at Versailles this one has not been decorated with a large painting but left bare to complement the soft décor of the bedroom. Madame de Pompadour left her mark on many of the salons at Versailles and this was one of them. This was a part of Madame de Pompadour's apartments at Versailles until her death in 1764. The slight curve in the very shape of the room was by her design and the marble chimney was created for Madame de Pompadour. This mistress of the King had the walls decorated with the finest and most elaborate wood-work but none of it survives to the present day - instead the present walls are simply done in white wood-work without any further decoration to them.
After Madame de Pompadour's death this salon was transferred to the ownership of Madame Adélaïde who transformed it into her Grand Cabinet. The present cornice is restored to the style it had when Madame Adélaïde occupied the room. The lovely instrument belonged to Madame Adélaïde which is most likely also the case with the violin - Madame Adélaïde was renowned for her excellent violin-play.
The two large paintings are of Madame Adélaïde's elder sisters, Madame Henriette and Madame Elisabeth - both painted by Nattier. Three of Madame Adélaïde's other sisters - Mesdames Victoire, Sophie and Louise - are portrayed in a portrait that hangs above the door but this is painted by Douais. The chairs are gilded and lined with Beauvais tapestry. Posted by Louise Boisen Schmidt at 17:57