The dormeuse started out as a humble night cap and was one style available for all classes of society; you may also have heard of it under the name of "baigneuse" (bathing cap). For a noblewoman it was only to use at relaxed occasions but never at a ball or other formal event. White was the most common colour for the main part of the dormeuse but it would normally be trimmed with a colourful ribbon preferably of silk. It became very popular in the 1770's in France probably in the same wave that brought the begèret (straw hat) to court as the idealised lives of shepherds were all the rage at this point.
Sometimes the dormeuse was tied underneath the chin with straps attached to the crown of the cap; this crown would be rather close-fitted to the head but avoided a too tight look with the large ruffles. 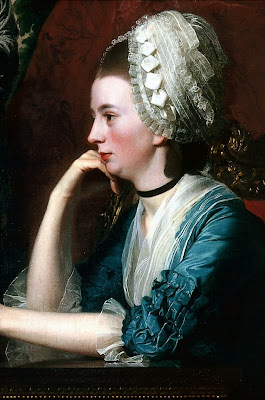 The dormeuse above is a perfect example of how the edge of the cap was often decorated with a ribbon or pattern that stood out compared to the others - notice the small squares. 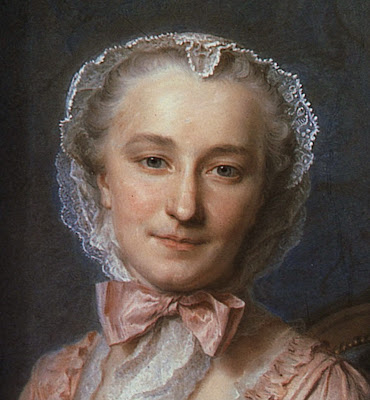 Posted by Louise Boisen Schmidt at 20:49