The bergère was a straw-hat - also known as a milkmaid's hat - which was originally used as a masquerade accessory for courtiers who wanted to go as shepherd/shepherdess (it literally means "shepherdess") but later evolved into an accessory that was compatible with a fashionable woman's wardrobe. The hat was usually decorated with flowers or silk ribbons.
It was especially popular during the middle of the 18th century where it was unthinkable for a gentlewoman to go outside without some sort of hat or bonnet to protect her complexion. It is possible that the hat was named after Madame Bergeret who was painted with a large straw hat by François Boucher. The bergère had a shallow crown and a wide-set brim which made it tip either down in front of the wearer's face or the back of her head.

Madame Vigée Le Brun - fashionable as always - even chose to paint herself wearing a bergèret decorated with real flowers, a feather and a ribbon: 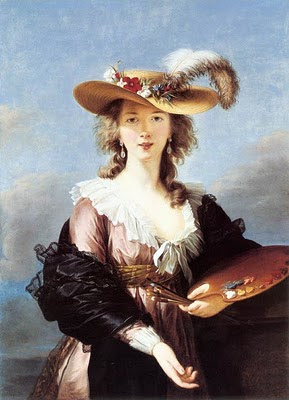 Here are some other examples of the straw hat: Posted by Louise Boisen Schmidt at 20:19