An antechamber as well as a small vestibule makes out the entrance to what cane be considered the main apartment. One of the most dominating rooms in this apartment is the Salon des Captifs so named for the elaborate fireplace which has been decorated with several different illustrations - it is the design of Gilles Guérin who dedicated it to Louis XIII as well as a frieze of the King riding a Roman chariot. Also, a likeness of Louis XIII hangs above the fireplace flanked on each side by two chained prisoners symbolising the French King's victories during the Thirty Years' War. It is from the artworks that the suite of apartments has acquired its' other name: l'appartement des Captifs.
The lounge is mostly known by the two spectacular paintings by Pierre-Jacques Antoine Volaire and Hubert Robert. 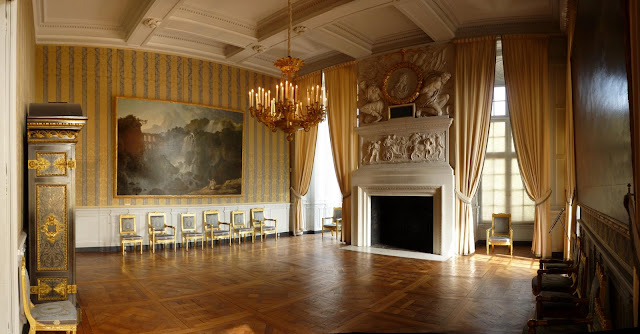 Posted by Louise Boisen Schmidt at 22:32