Slightly larger than the boudoir, the Salon of Buffets (Salle des Buffets) has recently been restored and during this process it has also been covered in the same tapestry as the previous rooms - mind that some of the photos shows bare wall but that prior to the restoration. The room has most likely received its name due to the large number of porcelain figures and exquisite plates and cups exhibited in this room.

Both Louis XVI and Marie Antoinette are represented in this salon. A portrait depicting Louis XVI giving alms to a poor family living near Versailles hangs in this room - supposedly it is based on an actual visit made by Louis XVI in February 1784. A drawing of Marie Antoinette as Dauphine (from 1772) also adorns the walls. Both are likewise portrayed on two white busts on the mantelpiece. A large cabinet is filled with white porcelain figures such as the busts of the royal couple. But in the middle there is a little coloured Sèvres-cup; it is painted with a fresh turquoise and is decorated with golden garlands, pink roses and a dolphin which was the symbol of the Dauphin - perhaps it belonged to Louis XVI?

Another cabinet proudly shows off a tea set in chinoiserie style bought by Louis XVI in 1774 - the artists' signature is still visible. The set consists of a tea pot, 2 cups, 1 milk jug, 1 sugar bowl, 2 matching saucers and a large tray for it all. Another set of this style once owned by Madame Adélaïde (Louis XVI's aunt) as well as a Sèvre set of the Duchesse d'Artois is also to be found in this cabinet.
Strangely enough, a portrait of Louis XVI's nephew, Louis-Antoine d'Artois (Duc d'Angoulême), is also exhibited in this room. 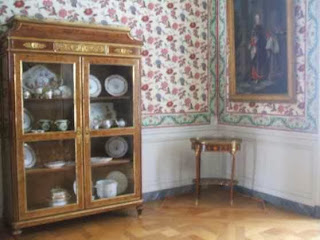 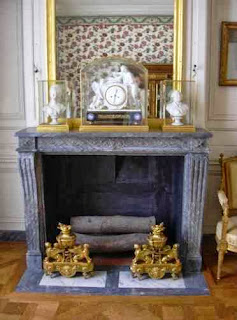 Posted by Louise Boisen Schmidt at 14:13