In the 17th century the family had developed into five branches: 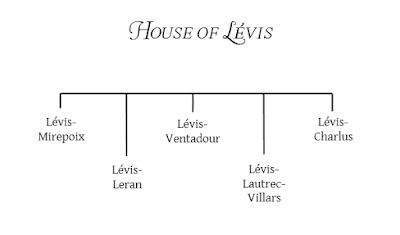 The family achieved ducal status with Gilbert III who became a duke and peer in 1589. Since then the family held considerable sway at court where they occupied valuable positions. Especially when Charlotte de La Mothe-Houdancourt - better known as Madame de Ventadour - became the governess of the children of the Duc and Duchesse de Bourgogne the family thrived. She would eventually save the future Louis XV from being purged by the royal doctors which would almost certainly have caused the little boy's death. As a result the King became excessively attached to her.

The army, too, became a field of choice for the House of Lévis. Several men in the family did well in the army; Francois Gaston de Lévis, Charles-Eugène de Lévis-Charlus and Gaston Pierre de Lévis-Mirepoix became Marèchals de France. Besides, the title of Governor of Limousin was bestowed on the husband of Madame de Ventadour. At court the family had been in the inner circle of the those aristocrats who served the royal family.
Madame de Ventadour had been lady-in-waiting to Marie Thérèse and then to Elizabeth Charlotte, Duchesse d'Orléans. Gaston Pierre de Lévis-Mirepoix was appointed ambassador to Vienna and also received the Orders of Saint-Esprit and Saint-Michel.
Posted by Louise Boisen Schmidt at 13:02