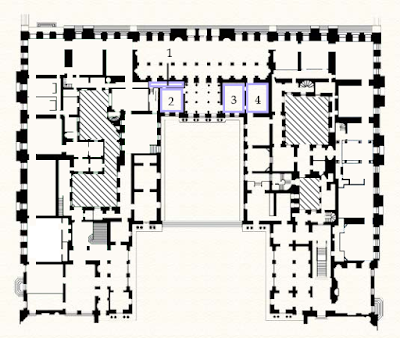 1) Antechamber
Although not technically an antechamber it has long been known as such. Marie Antoinette took over the chamber after Madame Sophie. This daughter of Louis XV had used it as a bathroom. 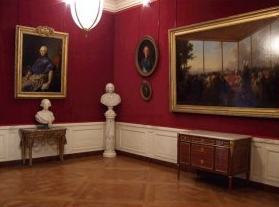 2) The Green Room
The room derives its name from the soft green tapestry on the walls. Despite the rather anonymous status of this room it holds several very well-known pieces all relating to Marie Antoinette's close family. One of these is a large portrait of Marie Antoinette herself wearing a dark blue dress and another is a circular portrait of Louis XVI. A chest created for the birth of their first son is placed in a glass cage (for more information about this piece go to "Artefacts"). Between the paintings of the King and Queen are their two children Marie Thérèse (Madame Royale) and Louis Joseph François Xavier. The dark red fireplace is adorned with golden ornaments; it is the only original piece in the room. A very small writing desk stands right in front of one of the tall windows accompanied by a chair in green fabric. Three other chairs of a similar colour are placed beneath the portrait of the doomed Queen - they are all the product of George Jacob.
A replica of a dresser that was ordered by Marie Antoinette and created by Jean Henri Riesener in 1788 carries a bust of Louis XVII - the son who would die as a prisoner during the French Revolution. 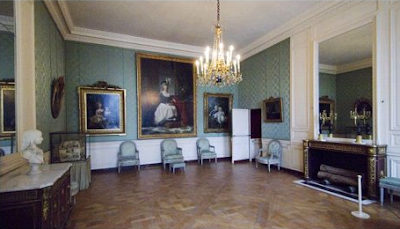 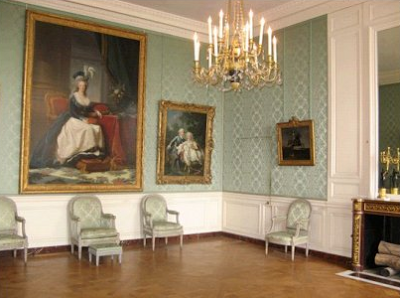 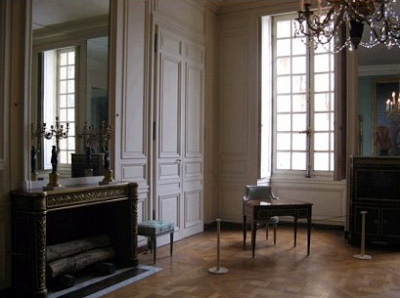 3) Bathroom
Marie Antoinette was one of the few at the French court who insisted on frequent baths which is exactly what these rooms were used for.

These rooms are located on the ground floor in the Queen's small apartments. Marie Antoinette had them created in 1782 and the new rooms consisted of: a bedroom, a library and the bathroom. 6 years later the Queen had the rooms refurbished and the wood-panelling decorated by the Rousseau brothers. During the 1830's these rooms were dissembled but the rooms are now restored to the state in which the Queen lived. The furniture in the bathroom now counts: Posted by Louise Boisen Schmidt at 18:15