Born on 28 February 1678 Marie Anne de Bourbon did not have the greatest prospects for a happy family life. Her father, Henri Jules, Prince de Condé, was notorious for his abusive nature and it was a well-known fact that he often beat his wife, the Bavarian Anne Henriette. Sadly, her Marie Anne would also become a victim of her father's abuse as was the case with her siblings.

What she did not have in family happiness Marie Anne could "make up for" in her status. She was born a Princess of the Blood and was known as Mademoiselle de Montmorency before her marriage. Her father was the First Prince of the Blood which meant that there would be no shortage of suitors even though she was the ninth child to her parents.


Originally, her father had wanted to marry her off to the Italian Duke of Mantua but that never came to be. Instead, Marie Anne remained at the Hôtel de Condé where she had been born and spent her entire life so far. Her father died in 1709 which can only have been a relief to her mother as well as those of her siblings still living at home.
Now, it would normally have been up to her mother or eldest brother (who died around this time too) to negotiate a marriage for her. Given that her siblings had married grandly as was expected (her eldest sister married the Prince de Conti while her eldest brother wedded a legitimised daughter of Louis XIV) it was in the cards that she would too. 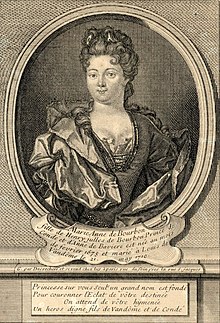 This, however, was not to be done the normal way. Marie Anne had no intentions of marrying her mother's choice and was aided by her sister, Louise Bénédicte, in arranging a match for herself. Consequently, Marie Anne married Louis Joseph, Duc de Vendôme on 21 May 1710.

The couple was only united for two days since Louis Joseph left for his château d'Anet while Marie Anne remained at the château de Sceaux where the ceremony had taken place. In the end the marriage was to be a short one. Marie Anne was widowed already two years after her marriage and had had no children. Despite the short marriage it would seem that the couple was on good terms; Louis Joseph died he left his wife the title and dukedom of d'Étampes which meant that she now held that title in her own right.

After her husband's death, Marie Anne moved to Paris where she settled in the Hôtel de Vendôme. Here, she initiated several improvements to the hôtel which would remain her residence until her death. Sadly, that event was not long in happening. Marie Anne died on 11 April 1718 at forty years old.
Posted by Louise Boisen Schmidt at 21:02