The House of Béthune had roots in the area of Artois (as a former province) where they were recognized as Lords of Béthune. Here they had their main seat in the castle overlooking the town of Béthune. The family line is dated back to around 1000. The family rose through the centuries from being local lords to  being princes, dukes and counts. However, as time went on the House of Béthune was separated into seven branches (there are a few more but these are either disputed or ended before the reign of Louis XIV). Each branch was distinguished from each other through their titles: 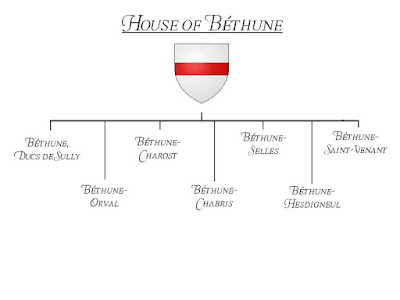 The House of Béthune is now completely extinguished except for the disputed branch of Béthune-Hesgineul.

Founded by the second son of Maximilien I, François, who actually had the honour of being made Peer of France with the title of Duc d'Orval by Louis XIII. However, for some reason the creation was never officially registered which meant that the title was not hereditary. This meant that the son of Francois (Maximilien-Alpin) never became a Duc but had the titles of Marquis de Béthune and Comte d'Orval.

Eventually, the grand-son of Maximilien-Alpin combined the lines of the Ducs de Sully with that of Béthune-Orval when he inherited the title of Duc de Sully. With his death the line of Béthune-Orval died out.

Surprisingly enough, this branch was founded by a cardinal. The younger brother of Maximilien I was Philippe who held the title of Comte de Charôst, Comte de Selles and Marquis de Chabris. He would later receive his red hat from the Pope but managed to father a few children first who carried on the family name.
As it happens, Philippe divided his titles between his two sons. The second son (Henri)  also went into orders and became an Archbishop while it was up to the third son to carry on the Béthune-Charost line and as such held the title of Comte de Charôst.

Philippe's grandson, Louis, was made the first Duc de Charôst - a title which was passed from father to son until the extinction of the line in 1800.

The fifth son of Hippolyte went into the army rather than becoming a clergyman. There he became a Lieutenant-Colonel which he added to his already existing titles of Marquis de Chabris. He also married Marie Louise de La Grange whose sister was Queen of Poland.
Thus, many of his descendants are to be found in the Polish aristocracy.

Actually, this line is a cadet-branch of Béthune des Planques whose claim has been somewhat disputed. The family originates from the sons of Pierre de Planques (himself the first to be somewhat accepted in his claim). His eldest son, Jean, founded this line which is still in existence.

Béthune-Saint-Venant
The youngest son of Pierre de Planques, Georges, founded this line.
In 1681 Adrien I François married the heiress to the titles of Comte de Saint-Venant and Vicomte de Lières and thus added them to his own name. It eventually died out in 1812.

Posted by Louise Boisen Schmidt at 21:53