Apartments of the Marquis de Sirent

The apartments of the Marquis de Sirent consists of three rooms now dedicated to Colbert, religion and the royal houses.
The room beneath with the tomato-red walls (the Colbert-room) is adorned with a portrait of Louis XIV and several of his ministers including the Marquis de Basville who was the first President of the Parlement in Paris and Étienne Aligre who became Chancellor in 1674 - and of course Jean-Baptiste Colbert himself. 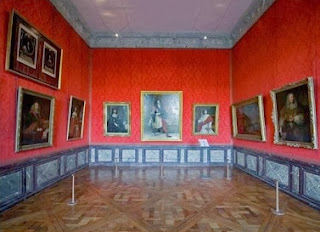 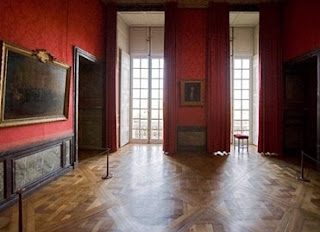 The second hall is called the "Le Sentiment Religieux" with walls covered in golden damask fabric. Obviously, the paintings and portraits in this room is chosen for their reference to religion. For example the Bishop of Ypres and the architect behind the chapel in Sorbonne are both depicted; so is Anne of Austria in prayer with her two sons in front of the Holy Trinity. The large painting taking up the entire back wall shows the plea for a recovery of Louis XIV when he suffered from typhoid fever. 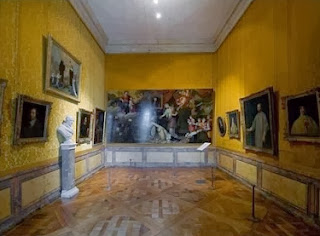 The third hall is dedicated to the houses owned by the royal family and paintings of their construction - including Versailles! The walls are also damask fabric but in a bright apple green. Most portraits depicts Louis XIV or Louis XV surveying the renovation or construction of a royal château such as Meudon, Marly and Saint-Cloud. Unlike the previous rooms there are other furniture than the paintings: a commode and a console table. 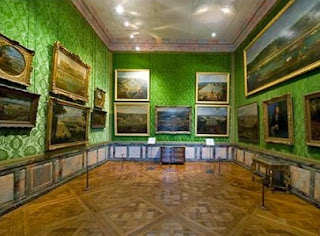 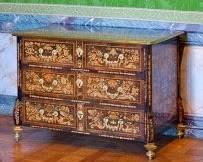 Posted by Louise Boisen Schmidt at 16:37