The Colour Blue: Favoured by Royalty

The production of blue clothing in the 17th and 18th century was a remarkably political subject. Traditionally, European dyers had used woad to achieve a blue hue. France had established centers of dyeing industries in Amiens and Toulouse - both cities used woad. There was a catch, though: dyeing with woad took a long time and a lot of work. With the increased trade with the Far East, indigo became an alternative to woad. Yet, the emergence of indigo threatened the trade at Amiens and Toulouse which is why a ban was placed on import of indigo.

Despite the ban, indigo flowed into the French market and Louis XV finally lifted the ban in 1737. While Toulouse - which produced primarily pastel blue - lost almost its entire business, new places were experiencing a boom. This was particularly the case for port cities such as Marseilles and Bordeaux.

In 1664, Louis XIV had established a new honour for his courtiers to strife for: wearing the justaucorps à brevet. Fifty courtiers - no more, no less - were admitted to this group who wore blue, silk coats and were permitted to follow the king on his hunts without a specific invitation. Another sign of high status was the blue ribbon of the Order of the Saint-Louis which was typically granted to all princes born to the royal family. Most official portraits from this period shows the order on proud display.

At court, Madame de Pompadour would often add forget-me-nots to her hair, hats and accessories. The blue flower represented faithfulness - in this case to her lover, Louis XV. This was not a new invention of behalf of the powerful maîtresse; for centuries, these flowers had been a sign of loyalty.

Blue was a regular colour at court in another, more martial capacity: uniforms. During the 18th century, blue increasingly became popular as a colour for military uniforms and France, in particular, matched their uniforms with the blue of the royal insignia. Thus, the gorgeous officers' uniforms of the age were a common sight at Versailles. It should be remembered that the majority of young aristocratic men served time in the army and given their status, they were immediately granted officer status - deserved or not.

It was not just the young military men who sported their blue uniforms at court. The Gardes Françaises - the king's personal bodyguard - wore deep blue uniforms with red trimmings.

Marie Antoinette's fondness for blue was such that several portraits of her depicts her in this very shade. Élisabeth Vigée Le Brun's last portrait of her from 1788 shows the queen in a blue velvet gown. Three years earlier, Wertmüller painted her with blue ribbons in her hair. Probably the most famous portrait of Marie Antoinette - also by Élisabeth Vigée le Brun - shows the queen in a luxurious, blue silk with blue and white trimmings.

The queen was not the only one who had a thing for blue hues. Her adversary, Madame du Barry, maintained a position in elegant salons after the death of Louis XV - although she was never welcome back at Versailles. She ordered a gown from Rose Bertin in January 1782 of blue and silver silk adorned with golden acorns and ears of wheat.

A gallery of blue gowns and suits: 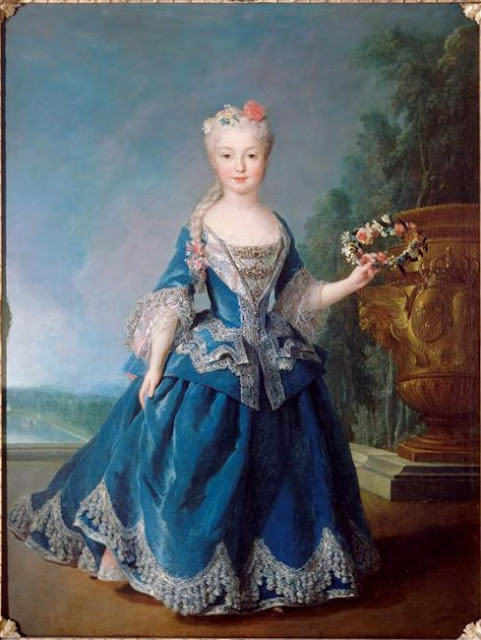 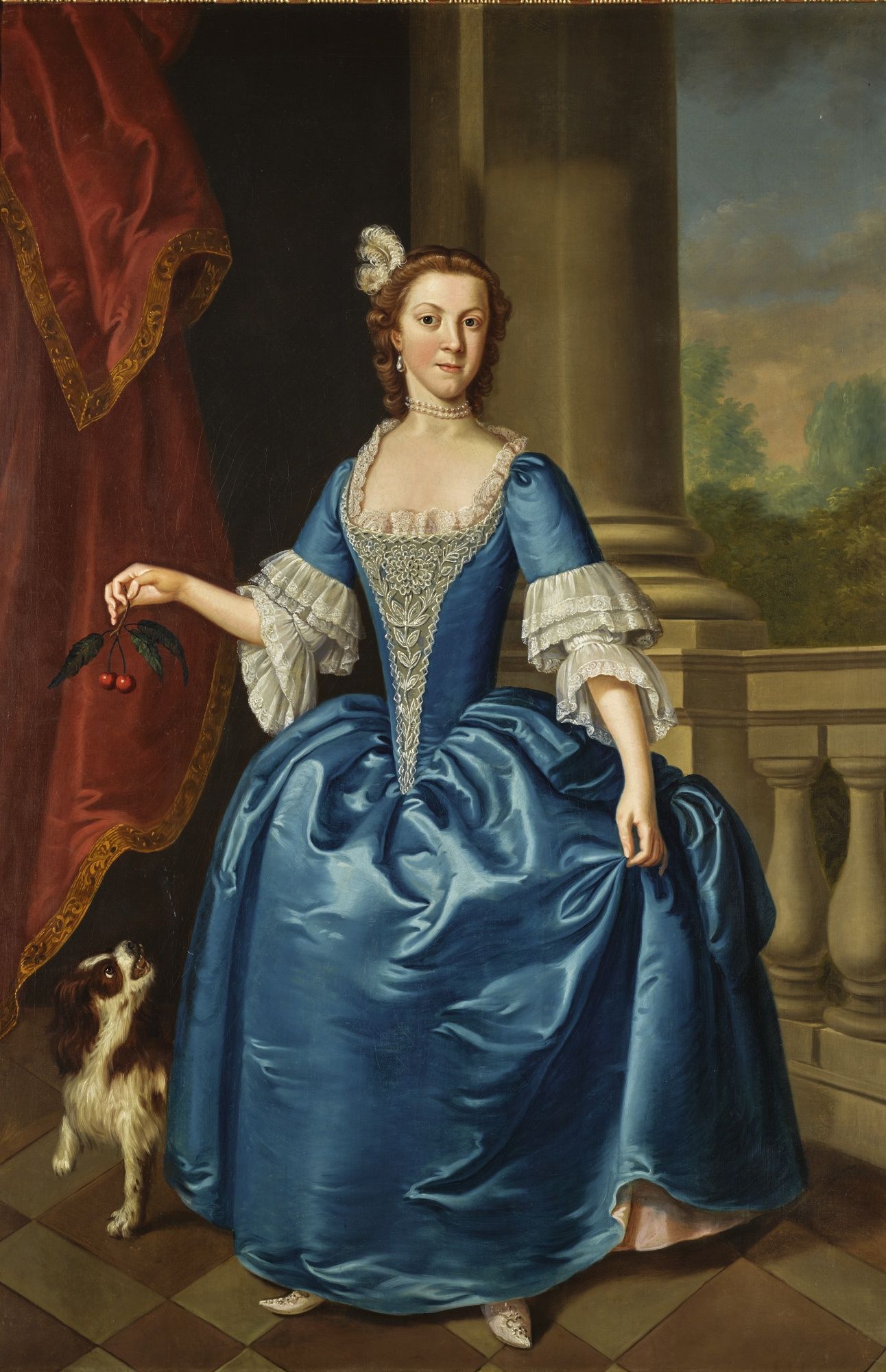 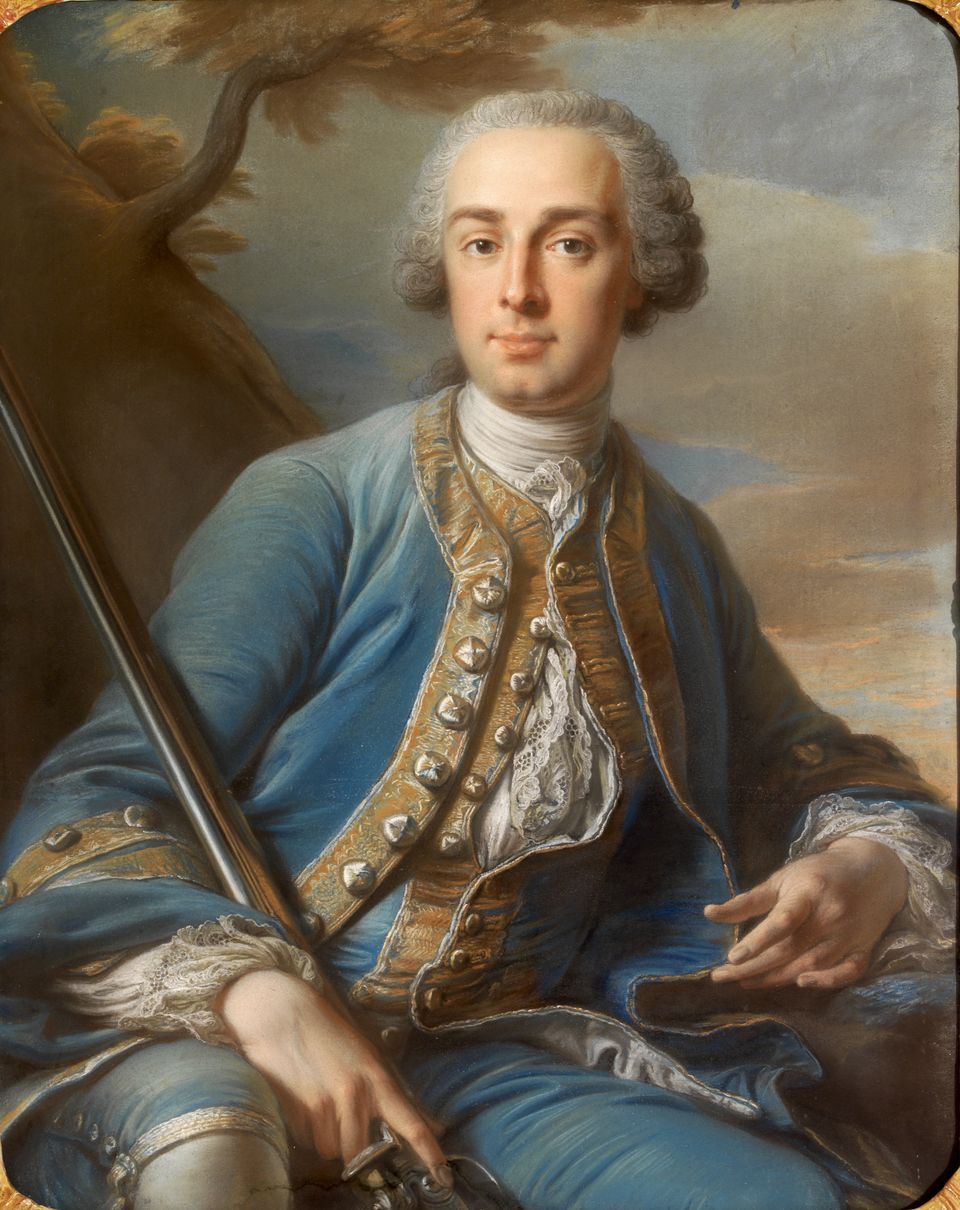 Posted by Louise Boisen Schmidt at 22:11

Email ThisBlogThis!Share to TwitterShare to FacebookShare to Pinterest
Labels: colours