Louise was housed on the first floor of the Aile du Midi; she was a neighbour to Monsieur Herault and the Marèchale de Berwick. The Duchesse de Duras left these rooms in 1741.

Louise-Jeanne de Durfort,  Duchesse de Mazarin
The Duchesse de Mazarin was housed in a spacious apartment on the first floor of the Aile du Midi. Her apartment must have been interesting to inspect; she was known as one of the great art collectors of her day. Her neighbours were the Marquis de Livry and the king's physician, Monsieur Chicoyneau. 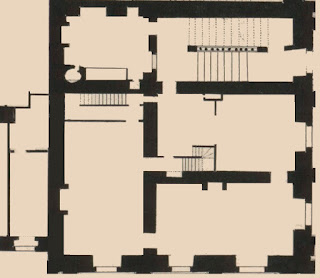 The Bishop of Laon's presence at court was required on a regular basis; he was the Grand Almoner of Marie Antoinette which meant that he was also responsible for the ecclesiastical household of the queen. He was housed in the attic of the Corps Central - more specifically, right above the Salon of the Grand Covert. As can be seen, he enjoyed a fairly large apartment. Three large chambers and several smaller cabinets made up his lodging.

Marie Victoire de Noailles, Comtesse de Toulouse
The large apartment occupied by the Comtesse de Toulouse was entered mainly through the large antechamber which she shared with the Duc and Duchesse de Penthièvre. The Comtesse de Toulouse served as a dame de compagnie to Marie Josèphe in the 1760's. Prior to this, she had gained the favour of Louis XV by helping to facilitate his affairs with all four sister of the Nesle-family. This apartment was occupied by Marie Victoire in 1744 and was located on the ground floor of the Corps Central. The reason for why she was lodged in this prestigious part of the château was that she had married the Comte de Toulouse, legitimized son of Louis XIV.

Posted by Louise Boisen Schmidt at 20:24

Email ThisBlogThis!Share to TwitterShare to FacebookShare to Pinterest
Labels: courtiers-lodgings