On 11 June 1726 a girl was born to Philip V of Spain and Elisabeth Farnese. At the time of her birth there was little hope of a match with France; just a year prior her elder sister - Mariana Victoria - had been sent back to Spain as a rejected bride for Louis XV. Nevertheless, in the world of dynastic marriages things can quickly be forgotten and Marie Thérèse Raphaëlle was as much an Infanta as her elder sister had been.

By 1739 the shipwrecked Spanish-Franco betrothal had actually worked in favour of Marie Thérèse Raphaëlle. This time it was not Louis XV's marriage but his son's that was in question. A match was decided between the Spanish Infanta and the French Dauphin for several reasons. One, neither nation had an interest in hostile relations with their neighbors. Second, it was feared that the earlier slight might result in just such hostilities and Louis XV wanted to make up for past wrongs. Thus, he married his eldest daughter, Louise Élisabeth, to the Infante Felipe and betrothed his son, Louis Ferdinand, to Marie Thérèse Raphaëlle.


In mid-December 1744 Marie Thérèse Raphaëlle stood bride at her proxy wedding in Madrid. The winter delayed her departure for Versailles a bit and it was not until February 1745 that she arrived at the heart of France. There is plenty of reason to suspect that she was more agitated than normal. Her own sister had after all been discarded even after arriving at Versailles. Several lavish celebrations followed the ceremony; one was the notorious Ball of the Yew Trees which saw the first court appearance of Madame de Pompadour.

The courtiers were not impressed by her looks. She was often described as being "not pretty" but her lack of looks was made up for by her personality. There was general agreement that she was extremely kind and amiable. Having been brought up at the rigid Spanish court it was hardly surprising that the new Dauphine was a pious woman with a serious streak. Some read her as being haughty.

As mentioned, her looks caused some stir. The major tipping point was her hair which was red - not one of the favoured colours of the time. As with the majority of redheads, she was naturally very pale which was definitely in her favour but her features were not considered to be good. Most of her portraits shows a young woman with remarkably small and narrow eyes and a long nose. 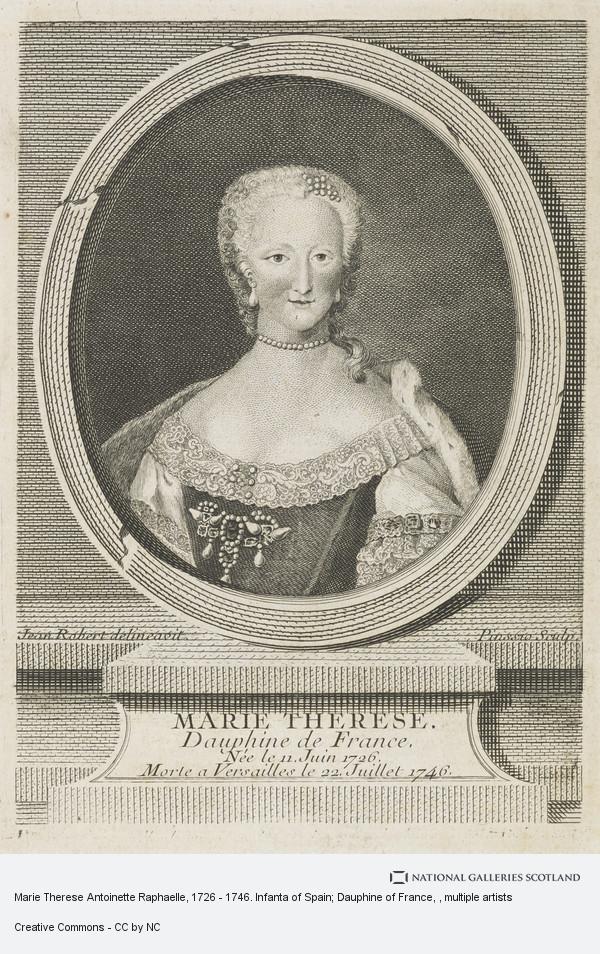 Jean Louis Soulavie claims that her ambitious mother - Elisabeth Farnese - had intended for Marie Thérèse Raphaëlle to take control of the Dauphin. However, as the relationship wore on the two became very close and that plan - whether Marie herself was invested in it or not - went completely forgotten.

Marie Thérèse Raphaëlle soon encountered marital problems of the same nature as Marie Antoinette would some 25 years later. The marriage was not consummated. However, the new Dauphine was determined to adapt to her new surroundings and very quickly became a valued member of the family. Both Louis XV and Marie Leszczynska were charmed by her and - more importantly - so was Louis Ferdinand. Her husband and herself agreed that the king's liaisons were immoral and neither cared much for Madame de Pompadour.

Unlike the new royal maitresse-en-tître, the new Dauphine was not out-going. Instead, she was rather shy which made the public life at Versailles trying. Her conditions were soon to improve, though. By September her relationship with Louis Ferdinand had improved tremendously and their marriage was consummated. Shortly after, Marie Thérèse Raphaëlle was pregnant. She gave birth on 19 July 1946 to a daughter which came as a disappointment. However, there were soon other problems. The birth had severely weakened the young woman's health and she rapidly deteriorated. Quite possibly she suffered from puerperal fever. Marie Thérèse Raphaëlle died at just twenty years old on 22 July.
Posted by Louise Boisen Schmidt at 23:15