The Girandole grove was one of the first planned and executed according to the design of André Le Nôtre in 1663; thus it is one of the oldest parts of the palace gardens. By 1669 a fountain was installed - it is from the mouth of the fountain that the grove got its name. This particular part strongly resembled a girandole. Also the smaller jets of water sprouting from the edges of the basin to the centre adds to the illusion.
Water terms were installed in the grove but had not been intended to appear at Versailles at all. In fact, Nicolas Fouquet had ordered them for his estate of Vaux-le-Vicomte. Once the terms had been finished in Rome they were dispatched thither but when the minister fell out of favour with the king they were appropriated by the crown.

However, little of Louis XIV's Girandole Grove remained during the reign of Louis XVI. As early as 1760 construction was begun in the grove; by 1775 a new horse-tree avenue had completely replaced Le Nôtre's original design. Thankfully, restoration in 2000 means that it now has again taken the shape originally intended. 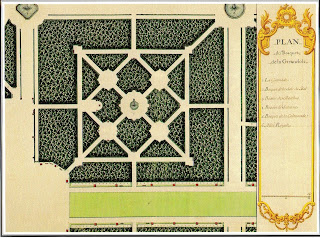 Posted by Louise Boisen Schmidt at 13:42