The Turkish Rooms of the Comte d'Artois

Having been inspired by the first instalment of a Turkish-inspired cabinet - installed in 1776 - the Comte d'Artois decided that he wished to have one - or rather three - of his own.

In 1781 he had the Cabinet de Turc created in his apartment in the South Wing at Versailles. For the task he turned to Jubault who was his chief furniture officer. In turn Jubault let the word be sent to furniture makers who created a good deal of "exotic" pieces of furniture for the Comte's new cabinet. The Comte d'Artois was infatuated with the style and ended up having no less than three rooms dedicated to it: two at Versailles and one at the Palais du Temple. Despite having been dismantled in the wake of the revolution a surprising amount of the original pieces has survived although the surviving pieces are from the different rooms.

The Louvre has created a replica of the original room as a part of an exhibition which is the closest we will get to knowing what it looked like. Francois Rémond produced a beautiful gilded table with a top of blue/grey marble. Keeping with the demand for eastern mysticism the four table legs are shaped into gilded mermaids crowned by various weaponry. The table is currently held by the Louvre.


Also, Rémond created five gilded candelabras; both table and candelabras were for Versailles and were created in 1780. The candelabras are now in Buckingham Palace.
The furniture were hung with bright yellow fabric and golden tassels. 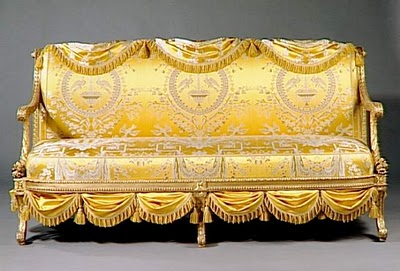 The decorated wall panels are for some reason held by the MET. They were originally intended for the rooms at Versailles and date around 1781. Turban clad figures dance on the yellow background surrounded by wreaths of flowers and blue medallions. Traditionally, the wall panels have been attributed to Jean-Siméon Rousseau - not how the mermaids on the panels perfectly match those of the table. The panel can be seen below:

Here is another version of the wall panels which was probably used for the other room at Versailles. They were also the work of Jean-Siméon Rousseau:

Posted by Louise Boisen Schmidt at 13:00