The family's origins are somewhat obscure; the founding member was Nicolas Neufville but it is not known when he was either born nor died. The same can be said for his son and heir, Richard.
What is known is that the fourth generation served Philippe III de Bourgogne which in turn led to new positions of power including ambassadorships.

Nicolas IV de Neufville de Villeroy was granted the title of Marquis de Villeroy by Louis XIII; his son was further given the marquisate of d'Alincourt.
The family was finally entered in the peerage in 1663 when Nicolas V was made Duc de Villeroy; he was also given the prestigious post of governor to the newly born Louis XIV. Governorship of a future king would be bestowed upon the family again when Louis XV turned seven years old.

The Neufville de Villeroy-family's generations as they were from the time of Louis XIV:

1) Nicolas V de Neufville de Villeroy married Madeleine de Blanchefort de Crèquy
Nicolas was under the protection of Cardinal Jules Mazarin who ensured him the title of Marèchal de France. The favour of the powerful Cardinal further led to the appointment of governorship of Louis XIV as well as the granting of a knighthood of the Saint-Esprit. Louis XIV would later make him head of the royal council of finances. Most importantly he was made a peer of France by the elevation to Duc de Villeroy.

The couple had four children:
2) François de Neufville de Villeroy married Marguerite-Marie de Cossé-Brissac
François was a playmate of Louis XIV and Philippe d'Orléans due to his father's governorship. When he reached adulthood he joined the military where he served as colonel of the infantry before being made Marèchal de France. He suffered a humiliating defeat to Prince Eugene who took him as a prisoner of war - eventually he was exchanged for the Count of Wallenstein. When he returned to court he was made head of the council of finance like his father - a position he would maintain during the regency. Louis XIV left him the governorship of Louis XV which the regent agreed to.

The couple had seven children:

3) Louis Nicolas de Neufville de Villeroy and Marguerite Le Tellier de Louvois
Like his father he entered the army where he became a Lieutenant General in 1702; later he was granted the knighthood of Saint-Esprit. By 1716 he inherited the title of Duc de Retz upon the death of his cousin who died without an heir.

Marguerite was the daughter of the king's minister, Louvois.

The couple had four children:
4) Louis François Anne de Neufville de Villeroy and Marie Renée de Montmorency
Louis became a Marèchal de camp in 1738 and later a Lieutenant General. It was under his patronage that the famous Villeroy-porcelain manufacturer was established in 1748.

Marie Renée was the daughter of the Duc de Piney-Luxembourg.

4) Gabriel Louis François de Neufville de Villeroy and Jeanne Louise Constance d'Aumont
Gabriel was captain of the king's guards as well as a knight of the Order of Saint-Esprit in 1773. In 1778 he bought the title of Duc de Retz. Gabriel was guillotined on 28 April 1794.

Jeanne Louise Constance d'Aumont was the daughter of the Duc d'Aumont. She survived the revolution and tried in vain to regain her vast collection of books which had been confiscated.

The couple had no children but Gabriel had daughter by Étiennette Marie Périne Le Marquis. 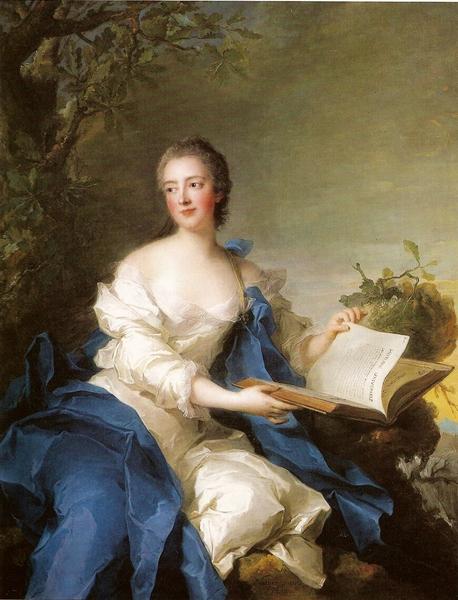